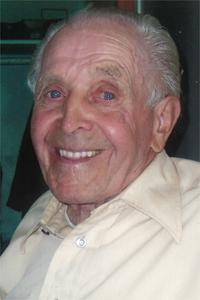 John Nedza of Coaldale passed away peacefully at the Coaldale Health Care Centre on Tuesday, June 18, 2013 at the age of 91 years. He was born in Poland on August 1, 1921. He is survived by his wife of 68 years, Anastasia, their children Paul (Avis) and Edward (Delaine), and grandchildren Fallon (Mike) and Renae. He is also survived by one sister (Mary) in Poland.
Being the oldest of five siblings, John was made to work from a very young age to help the family. During World War II John was forced to work on a farm in Germany. There he met his wife Anastasia and they married after the war. In 1950 they immigrated to Canada with their small son Paul. After surviving a long boat trip, they landed in Halifax and were to leave immediately for Lethbridge by train but John and a friend got separated from the group and actually arrived in Lethbridge a week after everyone else.
John worked for Charlton & Hill for 45 years as a roofer and foreman. When he retired he was the only roofer who worked that long in the roofing trade. He used his roofing knowledge to help people with their roof problems.
John was very active in the Community. He was a school trustee for a number of years with St. Joseph’s School and active in the St Ambrose Church as a member, usher and volunteer. He loved to be outdoors and working in the yard. He will be greatly missed.
Thank you to the staff at the Coaldale Health Care Center. You were all absolutely great with John.
For those who wish, memorial donations may be made in John’s memory to the Coaldale Health Care Centre, 2100 — 11 Street, Coaldale, AB T1M 1L2.
A Funeral Mass will be held at 1:00pm on Monday, June 24, 2013 at ST. AMBROSE CATHOLIC CHURCH | 1513 23 Ave, Coaldale with Father Thomas Vadassery, celebrant.
Send condolences at www.coaldalefuneralhome.com