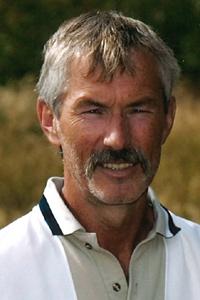 1960 ~ 2013
It is with great sadness that we announce the passing of our dear husband and father, Gregory Stephen Olshaski, on Saturday, June 15, 2013 at the age of 53 years, with his family by his side.
Greg was born April 5, 1960 in Lethbridge, AB to Robert & Dorothy Olshaski, the middle child of five sons. He married the love of his life May (Marianne) in Lethbridge on August 16, 1986. Greg and May were blessed with two children – Ryan Olshaski (November 24, 1994) and Darcy Olshaski (March 5, 1998). The adoration, devotion and dedication to his wife, May, and to his boys, Ryan and Darcy, was truly amazing. They were a bonded family and the amusing “family talks” at supper times will be so missed. He treasured all the time spent with May, Ryan and Darcy and took great pride & joy in being a husband and father and in guiding & supporting his family.
Greg went through the Catholic School system graduating from Catholic Central High School in 1977. Greg was very active in sports and played baseball up through the Little League. He continued with fastball for Lethbridge Council #1490 Knights of Columbus travelling to Rutland, B.C. with his dad and two brothers for many years, winning many trophies and just enjoying the family time spent together.
Greg as well played hockey with the Lethbridge Minor Hockey League and for the CCH Cougars Football team. He has since so enjoyed to just sit, relax and watch hockey with his dear friend Jack.
Greg proudly worked for Olshaski Farms for most of his entire life. Farming was in his blood and he was later employed by Jack Giffen and then One Earth. Greg had just received his Class 1 driver’s license while employed with Serfas Farms Ltd. He was such a hard worker and was sought out by many employers in the farming field.
Like his father, Greg was brilliant with numbers. There was never need for a calculator, no task was too difficult and all were amazed by this ability. Greg admired and missed his father immensely and so cherished his mom. Greg’s family and friends meant the world to him.
Greg loved hunting and has proudly taught his two boys, Ryan and Darcy, in the past numerous years his skills. Every year he travelled to Saskatchewan with his brother-in-law Harry to get his trophy deer.
Greg also loved camping and was the one his family and friends looked up to if there was ever a problem. There were many hours spent sitting around a campfire trying to solve the difficulties of the world. He would host campouts for friends and family at his homestead which all lovingly called “Olshaski Park”.
His humour was extraordinary and you always had a big smile on your face when you were around him. He was unselfish and his focus was always on others around him.
Left with his memory are his dear wife of 26 years, May Olshaski; his dear sons Ryan and Darcy; his dear mom Dorothy Murrell and dear step-father Alex Murrel; his dear mother-in-law Margarete Moch; his dear brothers & sisters-in-law, Bob & Karen Olshaski, Rod Olshaski & Michele Derry, Ken & Millie Olshaski, Doug & Jacquie Olshaski; his dear brothers & sisters-in-law, Hanna & Don Cox, Peter & Linda Moch, Helen & Joe Meszaros, Harry & Sue Moch, Debbie Byrne, Danny Byrne, Robert Moch; his dear nieces and nephews Steven & Janine Olshaski, Matthew Olshaski, Candice Cockerill, Larissa Olshaski, Sydney Olshaski, Quinton Cox, Trisha & Kostas D’Agnone, Breanne Cox, Troy Moch, Nichole & James Carefoot, Chad & Kate Eggebrecht, Sean & Heidee Walshe, Brent & Jodi Merriman, Jennifer & Mike Hall, Jessica Byrne, Daneel Byrne, Ashley Moch; as well numerous aunts, uncles, and cousins.
Greg was predeceased by his Grandma Wright, his Grandpa Olshaski, his Grandma Olshaski, his father, Robert Olshaski, his father- in-law, Gerhard Moch, his sister-in-law, Lynn Olshaski, and his nephew, Duane Moch.
The family would like to sincerely thank the emergency staff at Lethbridge Regional Hospital, the STARS helicopter, and the staff at the Foothills Hospital for their kindness & caring towards Greg & his families for the days until his passing.
Greg will be so sadly missed and so lovingly remembered by his dear wife, his dear boys, his mom, his step-dad, his mom-in-law, his brothers, his brother-in-laws, his sister-in-laws, his nieces, his nephews, his uncles & aunts, his cousins and his dear friends. Greg leaves behind a legacy of fond memories and a family who dearly loved him and who will miss him terribly. Our pain at losing Greg is enormous. Greg was a very caring and loving husband and father. He is a one of a kind wonderful special man and he will never be forgotten. His spirit will live on in our hearts and minds forever. Greg is now at rest and peace. We love you so very much Greg and we will miss you every single moment of every single day. Our lives will be so empty without you.
Vigil Rites will be held at 7:00 pm on Friday June 21, 2013 at MARTIN BROTHERS RIVERVIEW CHAPEL, 610- 4 Street South, Lethbridge, AB, led by Deacon Cliff Bogdan.
A Funeral Mass will be held at 10:00 am on Saturday June 22, 2013 at OUR LADY OF THE ASSUMPTION CATHOLIC CHURCH, 2405-12 Ave South, Lethbridge, AB with Father Kevin Tumback, celebrant. Interment to follow in the Mountain View Cemetery.
Donations in Greg’s memory may be made to the Heart and Stroke Foundation, Box 2211, Lethbridge, AB T1J 4K7.
Martin Bros. Funeral Chapels Ltd.
610 – 4 Street South
Lethbridge, AB T1J 4P6
Phone: (403)328-2361 Fax: (403)382-3623
Toll Free: 1-800-382-2901