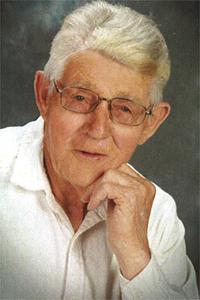 1934 ~ 2013
That if you confess with your mouth, “Jesus is Lord” and believe in your heart that God raised him from the dead, you will be saved. For it is with your heart that you believe and are justified, and it is with your mouth that you confess and are saved. Romans 10: 9-10 It is with great sadness and great peace we bid farewell to our dear Father, Grandfather, Great-Grandfather, Brother, and Friend, Jeff de Heer of 78 years farewell, knowing he now rests in the arms of his precious Savior Jesus Christ till we meet again. Jeff was a man with a deep abiding faith in his heavenly father, the salvation he had in his Lord Jesus Christ and the infallible word of God; the Holy Bible. Jeff was born on November 18, 1934 to Jasper and Clara de Heer in the Netherlands, the third of twelve children. At the age of sixteen years, Jeff immigrated to Canada with his family under duress as he would never have left the Netherlands of his own accord. 1960 brought Jeff in contact with the love of his life Miss Cecilia Mehrer and on November 10, 1962 they were married until death due they part which would be in 1987 just five months shy of 25 years. God blessed Jeff and Cecilia with four children; Katherine, Ramona, Teresa and Jasper-John (Jay). Jeff de Heer was a great husband and father, not perfect but great…Dad, your children watched first through the eyes of a child and then later through the eyes of an adult; our Father, Jeff worked fifteen and sixteen hours a day. A man who had his struggles and burdens to bear, a man who came to this country uneducated, unable to speak the language, who taught us- his children, all we needed to know about love, commitment, kindness, perseverance, faith and hard work by the simple eloquence of his example. Left to mourn and celebrate the blessing Jeff was in our lives are daughters: Katherine (Larry) Canfield of Stirling, AB, Ramona (Ken) Braun of Oxbow, SK, Teresa (Calvin) Gardner of Stirling, AB; son: Jasper-John (Lisa) de Heer of Blackfalds, AB; grandchildren: Byron (Kaylee) Canfield, Patricia Canfield (Chad), Lawrence (Crystal) Canfield, Neil, Ethan, Jessie, Kyle and Brett Braun, Keith Gardner (Jenn), Nicole and Rebecca Gardner, Cole and Shelby de Heer; great-grandchildren: Kathleen, Emma and Roxanne Canfield, Lucas Canfield and Jeffrey Gardner; and five brothers and four sisters. Jeff was predeceased by his wife Cecilia de Heer, his parents Jasper and Clara de Heer, infant brother, a sister Jaqueline, a nephew Kenny de Heer, sister-in-law Helen de Heer and parents-in-law John and Lydia Mehrer. A Visitation will be held between 7:00-9:00pm on Thursday, June 27, 2013 at MARTIN BROTHERS RIVERVIEW CHAPEL, 610- 4th Street South, Lethbridge. A Funeral Service will be held at 1:30pm on Friday, June 28, 2013 at TRINITY REFORMED CHURCH, 1100 40th Avenue, Lethbridge. Send condolences at www.mbfunerals.com.
Martin Bros. Funeral Chapels Ltd.
610 – 4 Street South
Lethbridge, AB T1J 4P6
Phone: (403)328-2361 Fax: (403)382-3623
Toll Free: 1-800-382-2901