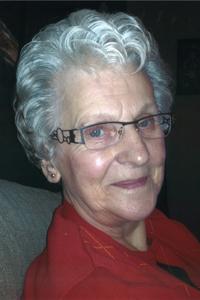 AUDREY VAN DYK, passed away peacefully on June 21, 2013 at the age of 75 years, after a lengthy and valiant fight with cancer that began 28 years ago. Her bravery, courage, strong will to live, unwavering faith in God, the love and prayers of family, friends, and many supporters carried her through until her fight became too much to bear. Mom was born on August 11, 1937 in Ridderkerk, Holland, the youngest of 4 children. She immigrated to Canada in 1953 settling in Lethbridge, where she met her sweetheart Henry Van Dyk. They were married in 1958 and were able to celebrate 50 years together before Henry’s passing. Mom was a loving, generous mother, grandmother and great-grandmother who gave everything she possibly could to her family. She was an amazing seamstress and could have given any professional seamstress a run for their money. She also loved to knit, needlepoint and crotchet creating many treasures for her family. She was a faithful member of St. Andrew’s Presbyterian Church serving on many church committees. Audrey is deeply cherished by and will forever be missed by her daughter Carol Van Dyk, grandson Jordan Sailer, grand-daughter Taryn (Jon) Hawkins and the apple of Audrey’s eye, great-grandson Lincoln Henry.Audrey is also survived by son Mitch (Laurie) Van Dyk and their daughter Dallas, brothers Cor (Lena) Van Pelt, Art Van Pelt and numerous nieces and nephews. Our family is deeply grateful for the outpouring of love, prayers, and support in many heart-felt forms from too many people to name individually, but including: the girls from Gail’s Apothecary, her homecare workers, the staff at the Jack Ady Cancer Center and especially the staff at St. Mike’s Palliative Care Centre.A Service of Remembrance will be held at ST. ANDREW’S PRESBYTERIAN CHURCH, 1818 – 5th Avenue South, Lethbridge, on Wednesday, June 26, 2013 at 1:00 P.M. with Reverend Hugh Jack officiating.This obituary was written in honor of my dearest Mother, who has been the strongest, most generous and loving example of a woman, mother, grandmother, great-grandmother and friend I could have ever had. This is my tribute to her memory which will be carried on in the legacy of love which is now each of us — the lives she formed and touched by her love.