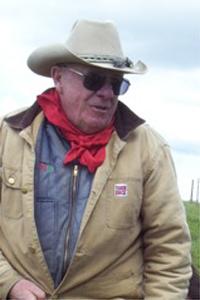 1934 – 2013
William “Bill” Thomas Long passed away at his home in Pincher Creek on Tuesday, December 10, 2013 at the age of 79 years. Bill was born on July 6, 1934 in Fort Macleod, Alberta to Thomas and Connie Long. He was an only child, as his parents passed away in a tragic car accident while picking berries in the fall of 1935. He survived the accident and was raised with his mothers family, the Varley’s on their ranch south east of Pincher Creek. Bill and his uncle Henry Varley ranched together and raised top quality Hereford cattle for many years. Upon Henry’s passing in April of 1990, Bill went on with the ranch for the next 10 years. After selling the ranch and dispersing his outstanding Hereford cows he retired to Pincher Creek for the rest of his years. Although he lived in town he retained many friendships within the ranching community, attending many brandings, cattle drives and bull sales over the years. He will be missed by many from both town and the country. A “Celebration of Life” will be held at Fishburn on Saturday, July 5th, 2014. In lieu of flowers, those who wish may make donations to STARS 1441 Aviation Park NE, Box 570, Calgary, Alberta, T2E 8M7 or www.stars.ca. To email condolences, please visit www.snodgrassfuneralhomes.com. Arrangements entrusted to Snodgrass Funeral Home, Pincher Creek (403) 627-4864.