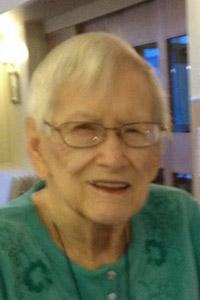 It is with great sorrow that we announce the passing of VERNA HILLCOAT on Monday, January 6th, 2014 at the young age of 95. She was predeceased by her loving husband Flt. Lt. H.B. (Pat) Hillcoat; her parents, Thomas and Martha Brown; and her siblings, Murray Brown (Viola), Margaret Farmer (Lionel), Dorothy Sallstrom (Kurt), Gordon Brown (Laura), Clarence (Keg) Brown (Kathy) and Kenneth Brown (Beryl), and special friend Brian Smythe. Verna is survived by her two daughters; Dr. Lynn Christensen (Terry), and Beverly Rowe (Jim Kavanagh), grandchildren Travis Christensen (Deanna), Dana Cunningham (Larry), Julie Hall (Darren) and Jim Rowe; great-grandchildren Tyler Goodwin, Cole Christensen, Kira Rowe, Jake and Justin Hall. She will also be missed by her nieces, nephews and friends. Verna was born in Moose Jaw, Saskatchewan, the second youngest of seven children. In her teens she was the pitcher and youngest woman on a baseball team called the McBrides that won the Saskatchewan championship that year. She also showed athletic ability in speed skating. She was widowed in December, 1944 and in 1951 moved to Lethbridge where she raised her two daughters. She worked as a clerk in Eaton’s from 1951 to 1958 and then at the Alberta Government Telephones as a cashier until she retired when she was 60. She won an Eaton’s of Canada golf tournament in Edmonton. Her ball always went straight down the middle of the fairway! She bowled at the Bowladrome for many years. During retirement she would drive her mini-winnie to Arizona for the winter. She was a member of Southminster United Church and loved her grandchildren. When Lynn and Bev grew up and left home, Verna found a new best friend when she got her poodle she named Guy. He was her constant and loyal companion. Verna was a strong willed, energetic, independent, sensitive, loving woman. She faced her challenges in life with her head held high. Flowers are gratefully declined. In memory of Verna, contributions may be made to the Canadian Cancer Society, 317-10th Street South, Lethbridge, AB, T1J 2M7. A Graveside Service will be held at MOUNTAIN VIEW CEMETERY, Scenic Drive South, Lethbridge on Saturday, January 11th, 2014 at 12:30 P.M. Those wishing to attend please meet at the main entrance by the Eternal Flame by 12:20 P.M.

No Condolences for “HILLCOAT Verna”