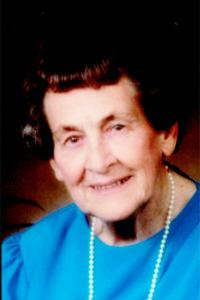 1910 – 2014
Ivy Elizabeth Lund (nee Bird), beloved wife of the late Clark Lund, passed away in Taber on Sunday, February 2, 2014 at the age of 103 years. Relatives and friends are invited to meet with the family at Southland Funeral Chapel, 5006 – 48 Avenue, Taber on Friday, February 7, 2014 between 7:00 P.M. and 8:00 P.M. and also at the church prior to the funeral service on Saturday, February 8, 2014 between 10:00 A.M. and 10:40 A.M. The Funeral Service will be held at The Church of Jesus Christ of Latter-day Saints, Taber Stake Centre, 4709 – 50 Avenue, Taber on Saturday, February 8, 2014 at 11:00 A.M. with Bishop Chris Ward conducting. Burial Service to follow at the Temple Hill Cemetery, Raymond on Saturday, February 8, 2014 at 3:00 P.M. Condolences may be forwarded by visiting our website at www.southlandfuneral.com. Dickie is survived by her daughters Maureen (Harry) Neitz of Stettler and Marilynn (Neil) Broadhurst of Calgary; daughter-in-law Patty Lund of Taber as well as ten grandchildren and seventeen great grandchildren. She was predeceased by her husband Clark Lund, son Darwin Lund, great granddaughter Brynn Lund, two brothers and three sisters. Dickie was born on June 30, 1910 in Reigate, Surrey, England. She left England at age two and moved to Vernon, British Columbia. After her teacher training, Dickie moved to Southern Alberta and taught school in Skiff for three years. She married Clark Lund on August 9, 1934 and they lived at a ranch in Skiff. In 1944, Clark and Dickie moved to Rosemary where she taught for twenty years, retiring in 1975. Following Clark’s passing, Dickie moved to Taber in 1984. Writing stories and poems of her memories, embroidering, horseback riding and singing were some of Ivy’s favorite pastimes. If friends so desire, memorial tributes in Dickie’s name may be made directly to Canadian National Institute for the Blind (CNIB), 410 Stafford Drive South, Lethbridge, Alberta T1J 2L2. Arrangements in care of Southland Funeral Chapel, Taber. Telephone: (403) 223-8778.