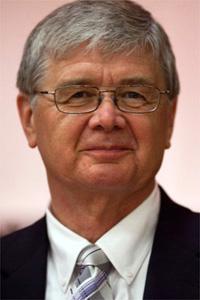 JOHN GRANT MILLER passed away on Friday, January 31st , 2014 at the age of 66. Grant was a devoted husband to Jacalyn (née Hudson) and father of nine children. He practiced law in Innisfail, Alberta for more than 37 years and was known by many through his work and service in the community. Grant is the eldest child of Joyce Pauline (née Davies) and James Rex Miller of Cardston, Alberta. He was born in his mother’s hometown of Bilston, Staffordshire,England on 28 October 1947 and came to Canada by boat at 10 months old with his mother. The family settled in Cardston in 1954. After serving as a missionary for The Church of Jesus Christ of Latter-Day Saints in England, Grant graduated first from the University of Lethbridge and then law school at the University of Alberta. In 1976 he settled in Innisfail to practice law at the firm that soon became Miller Lehane & Wild. Throughout his life Grant volunteered in many capacities both within the LDS Church and in the community. In his career as a lawyer, Grant always tried to be understandable and kind with his clients. Grant also helped those with limited resources, at times working pro bono or arranging to be paid by whatever means his clients could afford. He will be dearly missed by his wife Jacalyn and children David (Aimee), Cardston, AB; Janet (Darryl), Okotoks, AB; Logan (fiancé Rachel) Kelowna, BC; Chris (girlfriend Jamie Rowen), Toronto, ON; Steven (Andrea), Saskatoon, SK; Lisa (Dave), Edmonton, AB; Clare (boyfriend Ryan), Red Deer, AB; and Evan, Vancouver, BC; and his fourteen grandchildren. He is also survived by his parents, Joyce and Rex, and brothers Scott (Janice), and Craig (Kathy). He is welcomed home by his beloved daughter Angela, who passed away in April 1978. A Memorial Service will be held at The Church of Jesus Christ of Latter-day Saints, 5698 – 55 Ave. Cres., Innisfail, Alberta on Saturday, February 8th, 2014 at 11:00 a.m . with luncheon to follow. E-mail your condolences to: legacyfh@telus.net

No Condolences for “MILLER John”