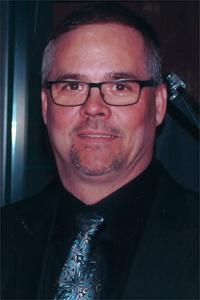 1964 – 2014
Kalvin Eric Odland of Vauxhall, beloved husband of Pamela Odland, passed away suddenly on Monday, February 3, 2014 at the age of 49 years. Besides his loving wife Pamela, Kalvin is survived by his three children Brendan, Jaden (Nikki Kress) of Lethbridge and Karlee (Brendan Hendriks) of Vauxhall; his brother Bradley and Doris Odland of Oyen, AB and their children Lexi (Devin) Declercq of Medicine Hat, AB, Larissa (Jeremey) Kenyon of Lethbridge, AB; great-nephews and niece Jaxen, Connor, and Apiphany of Medicine Hat; his father and mother-in-law Donald and Donna Virostek of Lethbridge, AB; brother and sister-in-law Trevor and Paula Virostek; nieces Rylee and Amber of Mountain View, AB. Kalvin was predeceased by his parents Alfred and Faye Odland, grandparents Erik and Abigail Odland and George and Mary Gillespie. Kalvin was born on May 6, 1964 to Alfred and Faye Odland. He grew up in the Vauxhall area where he attended school and graduated in 1982. He attended the Lethbridge Community College for one year taking Mechanics before returning to farm with his dad and brother. Kalvin married his high school sweetheart Pamela Virostek on April 6, 1985; they raised their family and farmed in the Stone Hill area until 2001 then returned to the original homestead in Vauxhall area where he was raised. For the past 8 years he has been working for AgCom Petroleum in Enchant. Kalvin was active in sports growing up playing minor baseball, hockey, and Vauxhall Spurs Baseball. He was also active in 4H. He has continued his dedication to sports as being President for 9 years and later director for Vauxhall Minor Hockey and President of Vauxhall Spurs Baseball for 4 years. His current role of General Manager of the Southeast AAA Tigers Midget Female Hockey. He also serves as a Director for the Alberta Major Midget Female Hockey League and a member of Vauxhall Spurs Alumni. Kalvin has also coached hockey and baseball for many years and has done countless hours of volunteer work associated with sports. Kalvin has touched and left a lasting memory with everyone he knows especially with his “laugh”. His passion and love were his family. He will be deeply missed by all. Family and friends are invited for a visitation between 4:00-6:00pm on Sunday, February 9, 2014 at MARTIN BROTHERS RIVERVIEW CHAPEL, 610 4th Street South, Lethbridge. A Funeral Service will be held at 2:00pm on Monday, February 10, 2014 at MENNONITE BRETHREN CHURCH of Vauxhall, 320 9 Street North, Vauxhall with Pastor Jeff Frostad and Pastor Jakob Pillibeit, officiating. Send condolences at www.mbfunerals.com.

No Condolences for “ODLAND Kalvin”