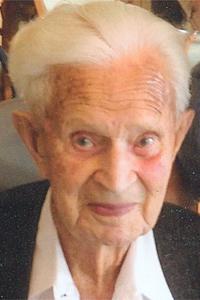 Fenton Boyd Blair passed away on Friday, February 14, 2014, at the age of 100 years, beloved husband of Mattie for over 75 years. He leaves to cherish his memory his daughter, Pat (Stan) Bohnet; daughter-in-law, Connie Blair; five grandchildren, Jim (Marilyn), Scott (Rose), Kelly (Robert), Barb (Curt) and Blair; several great grandchildren, one great great grandchild, two nieces and one nephew. He was predeceased by his parents, Ida Maud (Boyd) and William Alexander Blair; his son Bill Blair, his brother Russel (Nellie) Blair; sister-in-law, Grace (George) Jessop and one great granddaughter Kimberly Blair. Fenton was born and raised in Granum and attended Olds School of Agriculture where he met Mattie and knew she was the one! They married December 3, 1935, and spent the next 68 years ranching and farming in Granum before moving to Medicine Hat in 2003. They both enjoyed riding their horses in parades, cattle drives and the Seniors Rodeo; travelling to various locations around the world. Camping and visiting with friends and family were cherished events. Thank you to all who helped in his care. We greatly appreciate everything that was done for him. A “Celebration of Life” tea will be held on April 26, 2014 in the Granum United Church from 1:30 – 4:00 p.m. Those who wish to remember Fenton with a donation may do so to the Granum United Church Box 176, Branum, Alberta T0L 1A0. To e-mail an expression of sympathy, please direct it to: pattfh@telusplanet.net subject heading: Fenton Blair, or you may visit www.pattisonfuneralhome.com and leave a message of condolence. Arrangements are by the PATTISON FUNERAL HOME AND CREMATORIUM 540 South Railway St. SE, Medicine Hat T1A 2V6. Please call 1-866-526-2214 for further information.