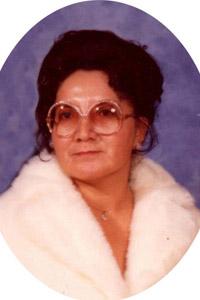 It is with great and profound sadness we announce the passing of our precious mother, Theresa Marie Black Water, beloved wife of the late Stanley Black Water Sr. on March 1, 2014 at the age of 76 years. Mom passed away at the Lee Crest Lodge, Cardston Alberta, following a brief but courageous battle with Cancer. She leaves behind to mourn her passing, her children, Ross Black Water Sr., Bernadette Oka, Stanley Black Water, Delores (Jack) Den Hollander from Bow Island, and daughter-in-law, Agnes Black Water. She provided a loving, nurturing and stable environment for the grandchildren whom she raised; Bill (Shannon) Black Water, Seven (Kim) Quesnelle, Sheryl Black Water and Nikki Quesnelle. She was adored and will be greatly missed by her grandchildren; Russ, Jody, Monica, Chickory, Jackie, DJ, Brooke, Renata, Max, Coy, Kelly, Shannon, Annie, Terri, Mark, Robin, Toby, Jonathan, Hank, Gordie, Lydia, Holly, Randall, Lindsey, 48 great-grandchildren and her adopted grandchildren; Christa McHugh, Jana, Kelly and Chad Day Chief. She will be greatly missed by her sisters; Donalda Big Throat, Veronica (Ray) Brewer, Christine Good Dagger, Linda (Darryl) Three Persons, one brother, Henry (Roxanne) Big Throat, sister-in-law Elizabeth Big Throat, one brother-in-law, Tony (Lorna) Black Water and numerous relatives from the Big Throat, Many Guns, Potts, Weasel Head, Spearson, Standing Alone, Day Rider, and Reevis families. Theresa was born on June 22, 1937 to the late Harry and Clara Big Throat. She was raised on the Blood Reserve and attended St Mary’s Residential School until she completed grade 8. In later years, Theresa attended night classes to satisfy her requirements for her high school academics. When Theresa finished school she adopted her future stepdaughter, Bernadette Oka who was two years old and just released from the Charles Camsell Hospital in Edmonton. Theresa met and married her lifelong love, Stanley Black Water Sr. on November 5, 1955. Together they ranched and farmed in Stand Off, St Mary’s Dam and the north end of the Blood Reserve. Theresa chose her profession as a domestic homemaker. She meticulously took care of her family and provided them with a secure and loving environment. She extended her generosity to the many children of her siblings who required a temporary but comforting refuge. She encouraged her children to strive for success and was the first one to support them through all their endeavors. She extended that same warmth and encouragement to the rest of her vast extended family. Theresa believed in perfecting everything in her domestic life by excelling in her culinary skills, keeping an immaculate home, and ensuring the multitudes of people that worked alongside Stanley on their farm, got enough food and sustenance. Theresa’s hobbies included knitting, crocheting, sewing, constructing bird houses, and tending a magnificent garden where she planted numerous plants and vegetables. She sewed numerous quilts and clothing and knitted sweaters for her children, nieces and nephews. Theresa was steadfast in her faith and love for our Lord Jesus and the Blessed Mother. Theresa was a devout Catholic and spent many hours meditating on her rosaries and prayers. She faithfully attended Mass every Sunday and received the Holy Eucharist. She encouraged all her loved ones to lead exemplary Christian lifestyles. She faithfully travelled to Lac Ste Anne with her husband, children, grandchildren, and extended family on a yearly basis. Mom believed in the ultimate power of prayer, and never once doubted the rewards of living a very humble and pious lifestyle. It was her faith in the Catholic Church that led her to join the Catholic Women’s League alongside her mother Clara. Theresa and Stanley loved to travel and together along with their daughters, travelled to many apparition sites in Europe and Mexico, including Lourdes, Rome, Medjugorie, and Guadeloupe. She also travelled to other parts of Europe such as Monte Carlo. Theresa was predeceased by her husband Stanley Black Water in 2006, her sons Carl Gordie Gerard in 1970, Harley Fraser Steven in 2013, and her daughters Brenda and Sandra in 2011. She was also predeceased by her grandson Brandon Carl, her granddaughters Rae–Anne and Cassandra Black Water, her daughter in law Christine Black Water, her parents Harry and Clara Big Throat, her brothers Horace and Max (Annabelle) Big Throat, her sisters Albertine Plume, Celina (James) Twigg, Pauline (George) Healy, Evelyn (Eugene) Twigg and infant Veronica, brother in law George Good Dagger and numerous other relatives. A Wake Service will be held at CORNERSTONE FUNERAL HOME, 2800 Mayor Magrath Drive South, Lethbridge, on Friday, March 7th, 2014 from 5:00 P.M. – 9:00 P.M. A Funeral Mass will be Celebrated at ST. MARY’S IMMACULATE CONCEPTION CATHOLIC CHURCH, Blood Reserve, Alberta, on Saturday, March 8th, 2014 at 11:00 A.M. with Father Pawell Andrasz O.M.I., Celebrant. Interment to follow at St. Catherine’s Cemetery, Blood Band, Alberta.

No Condolences for “BLACK WATER Theresa”