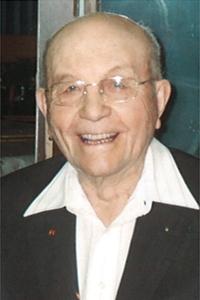 1920 ~ 2014
Ernie Housley of Lethbridge, beloved husband of Betty Housley of 67 years, passed away at home on Monday, March 10, 2014 at the age of 93 years. Ernie was born on October 25, 1920, in Bow Island, AB to Henry and Ellen Housley. He worked for CPR for 36 years, then took an early retirement in 1979 for health reasons. He also farmed near Coalhurst for 20 years. He retired in Lethbridge and spent many weekends trailering with “the bunch”. Ernie and Betty also enjoyed travelling, playing cards and spending time with family and friends. Ernie was a longtime active member of the Masonic Lodge and also a member of the Laurel Chapter of the Order of the eastern Star. Besides his loving wife Betty, Ernie is survived by his daughter Donna (Victor) Wiebe, sons Dennis (Diane) Housley and Doug (Beatriz) Housley; 10 grandchildren and 14 great-grandchildren; and sister Mary Crabb. He was predeceased by his parents, 3 brothers, and 1 grandchild. Family and friends are invited to pay their respects between 7:00pm and 8:00pm, on Sunday, March 16, 2014 at MARTIN BROTHERS RIVERVIEW CHAPEL, 610 4th Street South, Lethbridge. A Funeral Service will be held at 2:00pm on Monday, March 17, 2014 at MARTIN BROTHERS RIVERVIEW CHAPEL, with Canon Andrew Horne, officiating. Interment to follow in the Archmount Cemetery. Flowers are gratefully declined. Those who wish, memorial donations may be made a charity of your choice. Send condolences at www.mbfunerals.com.