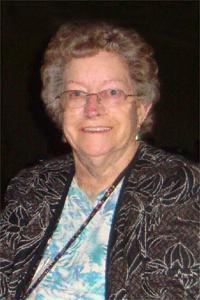 Jennie Georgina Brown (nee Monson), with Family by her side, passed away at the Chinook Regional Hospital on Friday, March 21, 2014 at the age of 83 years. Jennie is survived by her son Cameron (Bruce), and daughters Pamela (Bryan), Judy Guzzi (Duane) and Grandchildren, Marissa, and Nikolaos. She is survived by sisters Joyce (Jack), Dolly, Norma, Mildred, brother Bud (Marilyn) and numerous nieces and nephews. Jennie was predeceased by her Mother and Father, Alma and Oscar Monson, her son Dean Brown, and sisters Blanche, Marion, Lena, and brother Donald. Jennie was born in Coaldale. She was raised and educated in Turin Alberta. Jennie was employed by Hudson Bay Red Carpet for over 20 years and retired in 1992. Jennie spent her retirement years traveling, camping, having coffee with her friends and family, shopping and attending the jams on weekends. Help raising her grandchildren was the joy of her life. Don’t phone Mondays or Fridays because wrestling was on and she was not going to talk to you. Moving into the Garden View lodge was a highlight of her retirement. The new friends she met and the camaraderie that she felt was wonderful in the last year of her life. Jennie was a wonderful grandmother, mother, sister, friend and will be missed by all who knew and loved her. A Celebration of Life will be held at CORNERSTONE FUNERAL HOME, 2800 Mayor Magrath Drive South, Lethbridge, AB on Thursday, March 27, 2014 at 1:00 PM. In lieu of flowers donations can be made to the Canadian Lung Association: 515 7 St S (s 511), Lethbridge AB, T1J 2G8 in memory of Jennie Brown.