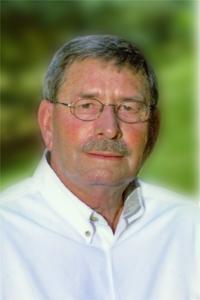 February 5, 1932 – March 24, 2014
It is with great sadness the family of René Chartrand announces his passing at the Claresholm General Hospital on Monday, March 24, 2014 at the age of 82 years. He will be dearly missed by his loving wife of 59 years Denise; his four children, Paulette Linn; Joanne Jahrig (Randy); Michelle Heward (Lynn) and Marc Chartrand (Charlotte); eleven grandchildren and two great- grandchildren; two sisters, Rhea and Jeaninne; one brother, Rejean and many nieces and nephews. René was predeceased by his parents, Emile and Marie Flore Chartrand; older brother Omer Chartrand; and eldest daughter Lise Estelle Melquist. René was born in Thornloe, ON and moved to Wainwright, AB where he married his sweetheart, Denise Lucienne Paré in 1954. They moved to Claresholm in 1957. He was responsible for the Water Treatment Plant and was promoted to Town Manager in 1975, until his retirement in 1994. He then pursued a new career with UMA Engineering until he was 78 years of age. René also served his community as a Volunteer Firefighter (20 years); School Trustee for the Willow Creek School Division (1974-77); and Board Member of the Claresholm Health Foundation (2003-13). René also received the Commemorative Medal for the 125th Anniversary of the Confederation of Canada for his significant contribution to Canada in 1992. René was a devote Roman Catholic and a lifetime member of the Knights of Columbus. He enjoyed camping at their RV property at Cowley, AB and traveling across Canada, but what was most important to René was spending time with his loving wife, Denise, their children and their families. René will be remembered for his commitment of service to Claresholm, devotion to his family and the positive impact he had on everyone he met. Funeral Mass will be celebrated at Christ the King Parish in Claresholm on Monday, March 31, 2014 at 11:00 am. The family would like to thank the staff at the Palliative Intensive Care Unit at the Tom Baker Cancer Clinic in Calgary and especially Dr. Gish and staff of the Claresholm General Hospital for the excellent, compassionate care René received during his final days. In lieu of flowers, donations may be made to the Claresholm & District Health Foundation (Box 2638, Claresholm, AB T0L 0T0) or to Palliative Care at the Claresholm General Hospital (Box 610, Claresholm, AB T0L 0T0). Condolences may be forwarded to the family by visiting www.leydens.com. Arrangements entrusted to LEYDEN’S FUNERAL HOME, Claresholm. Tel: 403-625-3212.

One Condolence for “CHARTRAND Rene”