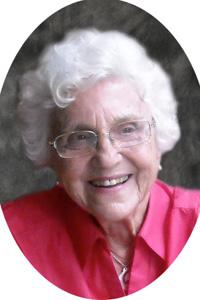 August 19, 1922 – March 21, 2014
Audrey passed peacefully, surrounded by family, at St. Michaels Palliative Care in Lethbridge, Alberta. Born in Mission, BC to Harry and Annie Dyer, then raised in New Westminster, B.C. While in Vancouver in 1949 she met and then married Ellis MacLennan. Audrey and Ellis had two children (Patricia and Donald) and after numerous moves within Edmonton, Calgary, Lethbridge they settled in Regina establishing and operating MacLennan’s Leather Goods. Widowed in 1976, she met and married Herb Rollefson in 1978. Widowed once again in 1979 Audrey moved back to Vancouver to be closer to her daughter, and siblings. While there she was blessed with family ties, friends, occasional out of country vacations, golfing, bowling, live theater, socializing and most of all excellent health. Audrey enjoyed people, chocolate and crosswords. Her humor, character, and caring made her a pleasure for all who met her. Her role as sister, wife, mother, grandmother, aunt, cousin and friend were second to none. Ageing and health required Audrey to relocate to Lethbridge in October of 2013. Audrey is survived by her son Don (Theone) MacLennan of Diamond City, Alberta, brother Louis (Min) Dyer of New Westminster, BC, sister Patricia MacLennan of Richmond, BC, four grandchildren Jessica (Emile) Reale of Auckland, New Zealand, Melissa Needleman of Vancouver, BC, Tessa (Jon) Brady of Taber, Alberta, Kailey (Farren) MacLennan of Saskatoon, Saskatchewan, and three great grandchildren Ayden, Lucia, and Rylan. She was predeceased by her parents Harry and Annie Dyer, husband Ellis MacLennan (1976), and daughter Patricia (2013). Family would like to acknowledge the compassion and care provided by the staff of Columbia Assisted Living, Lethbridge Home Care, and St. Michaels Palliative Health Centre. Funeral arrangements will be announced at a later date. In lieu of flowers donations to the Canadian Cancer Society (403-327-5452 or 317 – 10th Street South, Lethbridge, AB, T1J 2M7) are appreciated.

One Condolence for “ROLLEFSON Audrey”