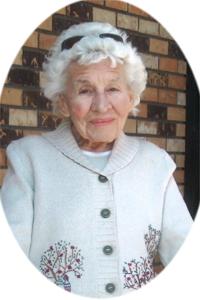 MRS. MAY BRADLEY (nee Cullen), beloved wife of the late Mr. Jack Bradley, of Lethbridge, passed away at the St. Therese Villa on Wednesday, March 5, 2014 at the age of 96 years. May was born on December 18, 1917 in Lethbridge and completed her schooling in Bow Island. She attended the University of Alberta for one year before entering the School of Nursing program at the Holy Cross Hospital in Calgary. Learning the “art” of nursing as well as nursing as a science was reflected in earning a medal for “Executive Ability” at her graduation. May said she was never sure what she did to deserve it but it must have been something good. Making patients feel comfortable and secure served as her mission in life for all the people’s lives she touched. After graduating in 1939 she began her Stewardess training program in Winnipeg for TCA (now Air Canada). An RN designation was required at the time for this career. On her second flight she met Jack Bradley, the flight captain. They were married in 1941 and settled in Montreal where their three children were born. Following Jack’s tragic death in 1945, May moved back west settling first in Vancouver and then in Lethbridge in 1949. She returned to her nursing career which spanned decades and included clinic work, Head Nurse at St. Michael’s Hospital and teaching at the St. Michael’s School of Nursing. May retired in 1977 but her love of nursing stayed close to her heart. Music was a major part of her life and her gift of singing and playing the piano will be an unforgettable memory for all. From sing-songs to birthday parties to hymns during the church services at Pemmican Lodge, it remained a therapy for both the player and the listener. May will be greatly missed by her son Tim, daughter Jackie (Ed), grandchildren Tammy (Todd), Jeff (Chelsea), Shannon and Kirsten (Felix) as well as five great-grandchildren. She will also be lovingly remembered by her sister Frances, sister-in-law Fay and many nieces and nephews. May was predeceased by her husband Jack, son Joe, parents “Minnie” and Louis, brothers Alan, Norman, Louis and sister Patricia. A Memorial Mass will be Celebrated at OUR LADY OF THE ASSUMPTION CATHOLIC CHURCH, 2405 – 12th Avenue South, Lethbridge on Tuesday, April 8, 2014 at 1:00 P.M. with Father Nathan Siray, Celebrant. A private family Graveside Service will be held on Wednesday, April 9, 2014 at 2:00 P.M. in St. Mary’s Cemetery, Calgary, Alberta.

No Condolences for “BRADLEY May”