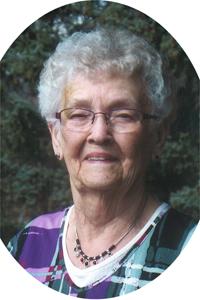 It is with heartfelt sadness we announce the passing of our mother, SONJA WIEBE, of Lethbridge, on April 7th, 2014 at the age of 94 years. She was predeceased by her loving husband Peter, parents Andrew and Ingrid Erickson and siblings Sigrid (Norman) Aschim, Doris Erickson and Bert (Evelyn) Erickson. Sonja is survived by her 2 daughters; Diane (Jim) Dundass of Sherwood Park and Doreen (Allan) Bird of Lethbridge; five grandchildren, Corey (Tanya) Dundass, Kevin (Sarah) Dundass, Kersten (Sean) Morris, Aron (Stacey) Bird and Tyler Bird (Jessie Westers). She also leaves behind 6 great grandchildren Grace and Jack, Matthew and Ryan, Corbin and Samuel- all who brought her great joy. Sonja was born in Riverhurst, Saskatchewan March 28th 1920, remained there through her schooling and worked hard on the farm. She met Peter at a dance when she was 15, married him when he was on leave from the army in 1942 and after the war they moved to Lethbridge. She worked various jobs but Eatons was her favorite. After moving to Calgary in 1965, she worked at Sears. They returned to Lethbridge after retirement. Sonja was a proud member of the Lionettes Club, Henderson Lake Golf Course and a Chartered Member of McKillop United Church. She was a very gracious woman dedicated to caring for her family and made the best bread, apple pies and cinnamon buns. A Funeral Service will be held at CORNERSTONE FUNERAL HOME, 2800 Mayor Magrath Drive South, Lethbridge, on Friday, April 11, 2014 at 1:30 p.m. with Pastor Allyn Mills Officiating. In lieu of flowers, donations can be made to the Alzheimer’s Society 402-740 4 Ave S, Lethbridge, AB T1J 0N9 or the charity of your choice.

No Condolences for “WIEBE Sonja”