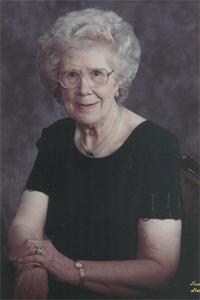 1921 ~ 2014
With her beloved family by her side Beryl Stimson gently passed away on the morning of April 12, 2014 at Chinook Regional Hospital. Predeceased by her loving husband John (Jack) F. Stimson (May 2, 1992), and her only sister Patricia Pitman (2012), survived by her children Derek Stimson (Stacey Kendall), Deborah Mitchell (John Burgess), Susan Stimson (Gerry Weninger), Marie Payton (Shell Payton); grandchildren Natalie Halverson (Lonny), Brett Stimson, Derek Stimson Jr. (Bailey Boehmer), Joanne Mahura (Gary), Julie Craddock (Jeffrey), Patrick Mitchell, Michelle Gemmill (Kenny), Alison Payton-Hari (Tom), David Payton, and 15 great grand- children. Beryl was born in Stockwell, England October 7, 1921 to Reginald and Irene Crofts. As a young girl she loved to ride her bike and was an accomplished tennis player. During WWII Beryl met the love of her life (Jack Stimson) at a Church dance for Canadian soldiers. Beryl and Jack were married on February 4, 1945 at Brighton, England, and in the spring of 1946 Beryl along with many other War Brides moved to Canada to begin a new life. It was in Taber, AB that Beryl and Jack raised their family and co-founded Hi-Way Service. Over the years she remained a very active member of the Canadian War Brides Association. Mom was always the happiest when surrounded by her children and grandchildren, she loved to share her many stories of life in England and the many challenges faced when she first moved to Canada. Mom was, is, and always will be a loving inspiration of strength for her children, grandchildren and great grandchildren. Family and friends are invited to pay their respects between 7pm – 8pm, on Wednesday, April 16, 2014 at MARTIN BROTHERS RIVERVIEW CHAPEL, 610 4th Street South, Lethbridge. A Funeral Service will be held at 1:00pm on Thursday, April 17, 2014 at ST. AUGUSTINE’S ANGLICAN CHURCH, 411 – 11 Street South, Lethbridge, with Canon Allan McCuaig, officiating. Send condolences at www.mbfunerals.com.