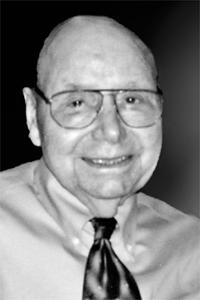 May 8, 1922 – May 11, 2014
Ted Bailie, originally from Skiff, AB, passed away peacefully on Sunday, May 11, 2014 in Calgary. Ted was proud to serve overseas on the HMCS Minas minesweeper during World War II. Shortly after the War, Ted returned home and met and married the local school teacher, Pat Doolan, in 1947. Ted and Pat purchased the family farm, where they raised their family of four daughters. They retired to Calgary when Ted turned 65. Ted was an active member of the local community, Foremost Legion, Elk and Moose Lodges. He was an avid hunter and superb athlete specifically enjoying baseball, hockey and curling with mealtimes revolving around the playoffs. He is survived by his wife Patricia and their four children Maureen (Leonard), Joan, Shiela (Tom) from Calgary; and Gail (Shane) from Revelstoke; ten grandchildren, and seven great grandchildren. The family wish to thank the staff and caregivers at the Colonel Belcher Normandy unit and Dr. Obanji for their wonderful care and attention to Ted during these last two years. Memorial donations may be made directly to the Tom Baker Cancer Centre ( 1331 – 29 Street NW, Calgary, AB T2N 4N2) or the War Amps of Canada (10568 Berkley Drive NW, Calgary, AB T3K 1E1). To express condolences, please visit: www.mountainviewmemorial.ca. A Celebration of Ted’s Life will be held on Wednesday, May 14, 2014 at 2:00 p.m. in the Chapel of Mountain View Funeral Home with Graveside Service to follow. Arrangements entrusted to Mountain View Memorial Gardens, Funeral Home, Reception Centre & Crematorium, 1605 – 100 Street SE (GPS: 242013 – 100 Street SE), Calgary, AB (403) 272- 5555.

One Condolence for “BAILIE Ted”