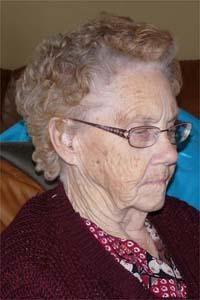 APRIL 13, 1926 – MAY 14, 2014
It is with great sadness that the family of Dorothy Taylor marks her passing at 88 years. A long-time resident of Coaldale and lifetime resident of southern Alberta, Dorothy died on May 14 in the St. Michaels Health Centre. She was born in Medicine Hat, Alberta on April 13, 1926 to parents James and Annie Foggin of Del Bonita, Alberta. She was the youngest of four siblings, having one brother and two sisters. Dorothy attended Shanks Lake School then Del Bonita Consolidated School until 1940. After her schooling ended she continued to live on the family farm and worked in the Del Bonita and Magrath area. In those early years she was an enthusiastic participant of the local dances held in all the rural communities south of Lethbridge. It was in this context that she met Jim Taylor and they were married in Magrath, Alberta on May 3, 1951. They were married for 57 years until Jim’s passing in June of 2008. The pair started their married life in Spring Coulee, then moved briefly to Hays, then to Raymond and finally Coaldale. Dorothy is survived by son Ross (Roberta) of Wetaskiwin and grandsons Kent, Keith, and Kurt; son Monte (Sheila) of Calgary and grandson Scott; son Mark (Zyna) of Coaldale and granddaughters Aliyah and Asia. Family and friends are invited to attend a funeral celebrating Dorothy’s life at 11:00am on Monday, May 19, 2014 at the COALDALE UNITED CHURCH, 2022-18th St., Coaldale, AB. Lunch will follow at the church with interment in Magrath at 2:00 PM. The family wishes to extend sincere thanks to the attending staffs of the Lethbridge Regional Hospital and the St. Michaels Health Centre. Send condolences at www.mbfunerals.com.

One Condolence for “TAYLOR Dorothy”