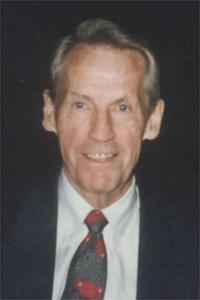 1919-2014
On Saturday May 24, 2014 heaven welcomed home a true angel as JOHN BURNS LARSON passed away peacefully with his sweetheart by his side. Born June 19, 1919 to Loren and Geneva Larson, Burns was just a few weeks shy of 95 years old at his passing. He will be remembered as a great example of how to live life to the fullest. Burns worked hard and played hard. He had tons of energy and a positive outlook on life. He loved people and he had a talent for making everyone around him feel good. Burns grew up in Raymond, attended the University of Alberta, and served in the Canadian Air Force before marrying Lois Gibb in 1946. They eventually settled in Cardston where Burns dedicated his life to serving and caring for others as a surgeon. He regularly made house calls to check on his patients, doing his best to help them heal physically, lift their spirits, and leave them with a smile. As a lifelong member of The Church of Jesus Christ of Latter-day Saints, Burns proudly stood for his beliefs. He valued healthy living and even went up against a major beverage company to have caffeine removed from a popular soda. He and Lois served an LDS mission in the Philippines, where they traveled throughout the country providing medical care to both missionaries and local residents. Burns was known for his sense of humor and story-telling. He loved to share fun memories mingled with jokes. In recent years, he would often end his stories by saying, \”We just really enjoyed life.\” Burns was a light that brightened this world. Loved ones can picture him in heaven telling stories and making people laugh. Burns is survived by his sister Verda Gibb Fischer, his eternal companion of nearly 68 years Lois Larson, and their 5 children: John (Sue) Larson, Robert (Dianne) Larson, Joanne (Randy) Ellis, Lori (Drew) Morrison, Barbara (Jason) Bartram, 29 grandchildren, and 40 great-grandchildren. Burns leaves behind a legacy that will not be forgotten. Many generations to come will likely tell his stories and feel inspired by his exemplary life. Friends may meet the family at Legacy Funeral Home, Cardston, on Friday ONLY , May 30th, 2014 from 7:00 to 8:00 p.m. The Funeral Service will be held at The Church of Jesus Christ of Latter-day Saints, Cardston Alberta Stake Center on Saturday, May 31st, 2014 at 11:00 a.m. Interment in the Cardston Cemetery. Email your condolences to: legacyfh@telus.net.