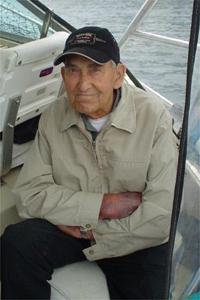 1927 ~ 2014
Frederick William Painter lived a vibrant and full life, passing away peacefully at the age of 87 years. He was our father, grandfather, our mentor, and we will miss him dearly. He married the love of his life, Audrey, and would have celebrated their 62nd wedding anniversary in June. Family was everything to Dad. He was eagerly awaiting the arrival of his first two great grandchildren . His relationship with his grandsons was one of his greatest pleasures in life, especially if he was fishing and camping with them. He fulfilled one of his bucket list items when he was able to take the family salmon fishing off the BC coast. Fred was born in Lethbridge on January 30, 1927 to William and Olive Painter. He moved to Frank, Alberta when he was very young and remained a part of the community until his passing. He was a talented horseman, hunter, trapper, fisherman and outdoorsman. Up until last fall he continued to hike the trails north of Frank much to the concern of his family. He served with the Canadian Military in WW II. He was a member of the Blairmore Legion. Fred was a proud member of CUPE local 812 and served on the executive for many years. He was also a volunteer fire chief, and councilor of the Village of Frank. Fred started his municipal career with the Town of Blairmore and retired as Foreman with the amalgamated Municipality of Crowsnest Pass. Fred was predeceased by his parents, his sister Beatrice Ruzicka, his brother Yarmil Ruzicka, and his infant son Gordon. In addition to his wife, he survived by his children, Blair (Cathy), Rosemarie (Greg Hood), Shane (Ruth); his grandchildren, Jordan (Jodie), Joel (Megan), Kalen Hood, Kristian and Marc, his sister Erma (Tom) Dogterom and many nieces and nephews. Send condolences at www.mbfunerals.com.