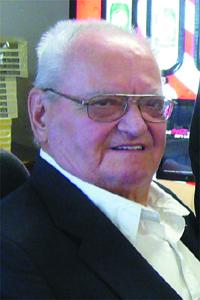 1924 ~ 2014
Andrew (Andy) Alm of Lethbridge, passed away suddenly at the Chinook Regional Hospital on Wednesday, June 4, 2014 in his ninetieth year. Just recently, on April 22 family and friends gathered to celebrate Andy\’s 90th birthday. Andy was absolutely delighted to have had the time reminiscing with old and new friends. In 1941 Andy left Iron Springs to join the 39th Battery Royal Canadian Artillery in Lethbridge. After a few months of basic training, he was sent to England in April 1942 where he served with the 3rd Medium Royal Canadian Artillery. After WWII he answered the call of his country a second time, and served in the Korean War with the 2nd Canadian Horse Artillery. Andy was very patriotic and took every opportunity to wave the Canadian flag he was so proud of. Throughout the years Andy has been committed to giving his all to the community and/or interests whether it was with the Boy Scout troupe in Iron Springs, VASA Lodge, Pottery Guild, Korean Veterans, the Legion, Norbridge Seniors, Korean Veterans, the Sons of Norway and most recently with his passion for Paper Tolling. Andy believed that one should not just be a member of a club or organization, but an active participant. Andy is predeceased by his wife Anne, and is survived by his three daughters, Sandra Jamieson (Acadia Valley, AB), Karen Alm (Lethbridge, AB) and Teresa Alm (Kingston, ON) and two Grandchildren, Nicole Staddon (Plattsville, ON) and Matthew Jamieson (Dutton, ON) and five Great -Grandchildren, Wyatt and Trent Staddon and Emily, Elizabeth and his 6 month old great grandson name after Andy, Everett Andrew George Jamieson. Andy is also survived by his sister Ellen Suelzle (Sundre, AB) and by nieces and nephews. In keeping with Andy\’s wishes there will be no memorial service. For those wishing, memorial donations may be made to Wounded Warriors (Canada General Fund) http://woundedwarriors.ca/, 310 Byron Street South, Suite 4, Whitby, Ontario L1N 4P8. Send condolences at www.mbfunerals.com.