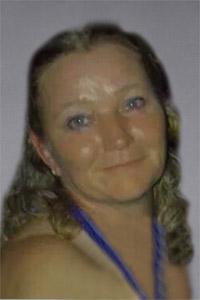 KRYSTELLE "KC" WELSH, beloved wife of Todd Ellison of Champion, AB, passed away at the St. Michael’s Palliative Care Centre on Tuesday, May 27, 2014 at the age of 49 years. Besides her husband, she is survived by her two children Patrick (Cassandra) Oxtoby of Kelowna, B.C. and Shantelle Welsh (Bill Sparkes) of Vulcan, AB and four grandchildren William, Cooper, Mackenzie and Melody. She is also survived by her parents William & Nora Burke, brother Stuart (Lisa) Burke and numerous aunts, uncles nieces and nephews. She was predeceased by her first husband, Mike Oxtoby and her grandparents. Krystelle was born on May 11, 1965 in Vancouver, B.C. where she was raised and educated. She overcame childhood diversities, including spina bifida. Krystelle was a strong person who tackled many things. She handled her cancer with grace and dignity. Krystelle was very proud of her two children and four grandchildren. She touched and influenced so many lives in her short time. Krystelle will be missed by all. A Celebration of Life will be held at THE CHAMPION HALL, 106-2nd Street, Champion, AB on Saturday, June 14, 2014 from 12:00 P.M. – 4:00 P.M. Cremation entrusted to Cornerstone Funeral Home. In lieu of flowers, donations can be made to the Canadian Cancer Society, 317 – 10 Street South, Lethbridge, AB, T1J 2M7 or to St. Michael’s Health Centre, Palliative Care Unit, 1400 – 9th Avenue South, Lethbridge, AB, T1J 4V5