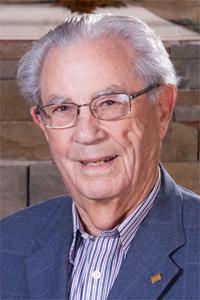 1919 ~ 2014
WILLIAM PAVEY \”BILL\” SKELTON of Lethbridge passed away peacefully at sunrise on June 15, 2014 at the age of 95 years. Bill was born in Saskatoon and grew up in Regina. The family moved to Edmonton where Bill graduated from U of A with a BSc in Pharmacy. Bill married Eleanor Greenleese in 1943 in Edmonton and they moved to Lethbridge where Bill practiced pharmacy until retirement. Bill is survived by sons Bob Skelton and David (Sharon) Skelton of Grand Forks, BC; daughters Marnie (John) Stanley of Lethbridge and Pat (Roger) Savage of Los Angeles; grandchildren Nyla (Cory) Free of Calgary, Terik Majid (Blynda) of Milton, Ont, Adam Skelton (Bryanne) of Calgary, Rachel Skelton of Toronto, Kristen Savage (fiancé Michael Marzouk) and Laura Savage of Los Angeles; great grandchildren Ava Free, Mya Free, Lenyn DaCosta, and Bridgette Skelton; sister Marjorie (Max) Ward and sister-in-law Vivian Storr of Edmonton as well as numerous nieces and nephews. The Pharo, Furukawa, and Stanley families were also important parts of his life. Bill was pre-deceased by his wife, Eleanor, and daughter-in-law, Pamela Skelton. A Celebration of Life will be held at 11:00 am on Thursday, June 19, 2014 at FIRST BAPTIST CHURCH 1614 — 5 Ave. S., with Dr. Bruce Martin, Officiating. In lieu of flowers, memorial donations may be made to the Kidney Foundation of Canada, 408, 740-4th Ave. S., Lethbridge, AB, T1J 0N9 or www.kidney.ca. Send condolences at www.mbfunerals.com.