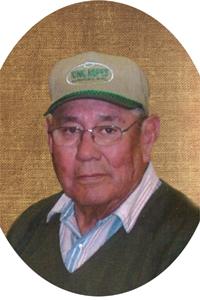 Mah’t tsu wah pina — "Man of Honour" – DONALD NO RUNNER returned home to the Creator after 78 years of an exemplary life. He passed peacefully surrounded by family on June 14, 2014, after a long battle with illness. Affectionately known as "Uncle", Don was born July 13, 1935, to Bob and Helen (Oka) No Runner and was the second eldest in a family of seven. Don often reflected on his traditional upbringing and how the harsh reality of Residential school influenced his life. Known to face challenges head on, direct and honest in all his dealings, Don was a man of his word. He led a purpose driven life and lived each day to the fullest. He often theorized "You need to be aggressive and fierce to get ahead in life" yet Don was the most kind and considerate person one could meet. As patriarch of the No Runner family he fulfilled the mantle with his natural ability to lead. He took the role as "the boss" seriously. Although a bachelor, he was father to all his nephews and nieces and the generations thereafter. Be it a rodeo, hockey game, powwow or graduation, for sure Uncle would be there proudly giving his support. He mentored his ‘children’ with patience, not one to mince words he was straight forward and exact. His lessons were simple; respect for self and others, work, pride in possessions, accountability for actions, and above all be generous and kind. Don was more commonly known by his childhood name "Nah tsoh Kiaa yu — Last Bear" a name given by his grandmother Sarah Big Wolf, who was instrumental in his formative years. Raised in a tight knit family, he learned strong work ethic at an early age. Work was a family venture, summers were spent at their home near the Big Lease farming their land and cutting the prairie hay, winters were spent at their Old Agency home tending to their livestock. Despite the busy household, laughter and love was foremost. Don attended St. Paul’s Anglican Residential School and excelled in studies and sports. He was an accomplished Boxer winning titles throughout the region. After completing school, Don worked side by side with his father running a large cattle ranch. He would remark on certain mentors who influenced his life; his boxing coaches Ken Tailfeathers and Emil Smallface Sr., fellow community member Fred Stabs Down and most especially his father Robert Lou No Runner. To the time of his passing, Don was involved in the school bussing business. He started as a school bus driver for Lethbridge Enerson Company and later became one of the founding members of the Blood Reserve School Bus Co-op and served on its Board for 49 years. Owning and operating school buses has become a three generation profit for family. Come rain or snow, Don’s bus was sure to run. He cared for the children who rode his bus and through the years they still referred to him as ‘Uncle’. Don’s passion was racing Quarter Horses. His top rate horses gained many wins for NR Racing Stables winning stake races from Trout Springs, Montana, California, Idaho and Grand Prairie. He oversaw his nephews as they trained and raced his horses. Of his many outstanding horses, he was most fond of Triple H Lucky Tarzan. Up to his passing, he ran a Quarter Horse operation, purchasing, breeding and selling high caliber rodeo and race horses. His impressive facilities housing his horses bespoke of his lifelong love of horses. Don instilled community mindedness and was proud of his clan ‘Aah kah ksomm aaks’ and his community of Old Agency. He was resident Elder on the Old Agency committee and encouraged community togetherness. As well, he worked for the Blood Tribe as a whole, having been elected several terms on Council. He was firm in his belief to give back. Don lived his life in accordance to his strong moral values. His motto was "Leave people with a hand shake and a good word". Throughout his illness, he never complained, with his usual strength of spirit he carried on. His key caregivers Clayton and Cindy lovingly tended to his needs for the last year of his life. To the end, Don’s love for family stood testimony as he was surrounded by family who kept vigil until his last breath. Uncle meant the world to his family and the loss is immense. He will be forever missed. Don is survived by his sisters, Philomena Little Bear, Frances and Della No Runner and the ‘kippi tah pok aaks’ Jennifer, Tom and Cheryl (who were raised by the old folks), sister and brother-in-law Marina No Runner and Dominic Cross Child, adopted brother Bryan Wadsworth and aunt Betty Healy. He was predeceased by his parents Bob and Helen, brother Lawrence, sisters Nancy No Runner and Dorothy Cross Child, nephews and nieces Darrell, Robert, Roddy, Dugan, Tawny-Jo, Morning Star, Harley Nova, brother-in-law’s, Horace Red Crow and Gilbert Little Bear, aunts Annie Day Chief, Beatrice Weaselfat, Edith Mills, uncles Steve and Tom Oka, best friend/cousin Art Healy Jr. and older brother/cousin Mike Oka/WW II Veteran. A Family Service will be held at CORNERSTONE FUNERAL HOME, 2800 Mayor Magrath Drive South, Lethbridge, AB on Friday, June 20th, 2014 at 4:00 P.M. A Wake will be held at OLD AGENCY HALL, Blood Reserve, AB on Friday June 20, 2014 at 6:00 P.M. The Funeral Service will be held at OLD AGENCY HALL, Blood Reserve, AB on Saturday, June 21, 2014 at 11:00 A.M. with Archdeacon Sidney Black Officiating. Interment to follow at One Spot/Old Agency Cemetery.