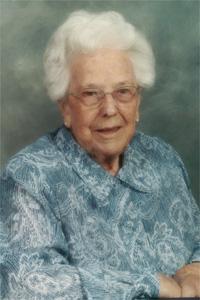 1928 ~ 2014
Mrs. May Mildred Thurston of Lethbridge, beloved wife of the late Mr. Edward Thurston, passed away on July 1st, 2014 at the age of 96 years. May was born in Eston, Saskatchewan on April 28, 1918 to Lucy and William Wright. She grew up in Moose Jaw, Saskatchewan with her brother Alex. May graduated in 1939 from the Saskatoon City Hospital as a Registered Nurse. With her family values and nurse training, May provided a strong nurturing environment to everyone she became acquainted with.May met Edward in Kindersley while ice skating, and their relationship developed as they both moved to Fort Macleod where Ed worked for the RCAF and May worked as a nurse. They married in Fort Macleod in 1941. After the war they moved to Lethbridge where Ed worked at the Research Station until retirement and May raised the family and volunteered in thecommunity. Southminster Church was foundational for May. She was a life member of the United Church Women (UCW), and active in the Southern Alberta Presbytery. Many of May’s closest life-long friends were part of the UCW 48 group. In 1969, with support from the Women’s Interfaith Committee May established the Advice, Information and Direction Referral Agency in Southminster Church to help people in need and build social awareness. She served on the first Board of Meals on Wheels and volunteered as a meal courier for several years. She was instrumental in the formation of the hospital Candy Strippers Program, and volunteered in a children luncheon program with the support of Mr. Stafford, the then Southside Safeway’s manager. May is predeceased by her husband Edward and her oldest daughter Patricia Diane Stewart. She is survived by her children Ron (Barbara), Linda Perdue (Garth) and Bruce (Wendy). Her strong values will always be remembered by her grandchildren Ryan (Angie), Tara (Brian), Lisa, Kasha, and Brynne and her thoughts will always be with her great-grandsons Mason, and Rhys, and her nieces and nephews. She will dearly be missed by all those who loved her and had the pleasure of being part of her life. She truly will be remembered as a person who believed that caring for others and building community went hand in hand. May spent her life giving selflessly and never wanted anything in return. She had a BIG heart! Her will and spirit will always be remembered as she now joins Edward and Patricia in peace. May is and will always be in our hearts. The family thanks the staff of Green Acres Foundation and all the professional caring staff who grew to know and love May at Extendicare. Many of you were a gift from God. The family is so grateful because you showed you cared on such a personal level. A Memorial Service will be held with family and friends. Dr. Austin Fennell, officiating at Southminster Church on Monday July 7th, at 11:00 am. Flowers are gratefully declined. Memorial donations in May’s name may be made to the Heart & Stroke Foundation or to a charity of your choice. Send condolences at www.mbfunerals.com.