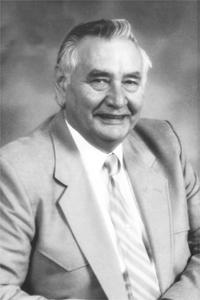 (July 17, 1932 – July 5, 2014)
Hans Schawalder passed peacefully at the age of 81 on the evening of July 5, 2014 at Camrose, Alberta with his family at his side. He was born July 17, 1932 in Lethbridge, Alberta. Hans attended school in Lethbridge, after graduation he began a career with A.G.T. (Telus) and retired after 32 years of employment. While working in Fort McLeod he met his wife Leah (Nihill) and they were married on November 1, 1958. On January 10, 1960 they were blessed with the birth of their son, Wesley Hans. In the fall of 1962 while Hans was preparing for a hunting trip they were once again blessed with the arrival of their daughter Lana Fay on October 29, 1962. Hans enjoyed spending time with his family, going camping and singing in the Stettler Men\’s Chorus HMS Pinafore. Hans was predeceased by his wife Leah; father Hans; mother Johanna (Honey); sister Lorraine; father-in-law Carl; mother-in-law Marie; brothers-in-law Willard and Jake; and nephews Bruce, Russell and Scott. Hans is survived by his children Wes (Denene) Schawalder and Lana (Vern) Lightburn; his grandchildren, Brad and Lindsay Lightburn; and Trent, Tara and Hailey Schawalder; his sister Bettie (Dennis) Palmerchuk; and sisters-in-law Jean (Wilson) Taylor, Delma Schmold, and Sheila Brummond; brother-in-law Don Schmidt; and many nieces, nephews and cousins. A Funeral Service was held 10:30 a.m., Saturday, July 12, 2014 from the Burgar Memorial Chapel with Rev. David Eriksson officiating. Inurnment has taken place in the Stettler Cemetery. If friends and family desire they can make a donation in Hans\’ name to the Alzheimer Society of Alberta, Alberta Diabetes Foundation, or to a charity of their choice. To send condolences please visit www.burgarfuneralhome.com. Burgar Funeral Home Camrose and Daysland (4817 51 Ave, Camrose, Alberta T4V 0V4) in care of arrangements 780-672-2121. Dedicated Service Since 1906.