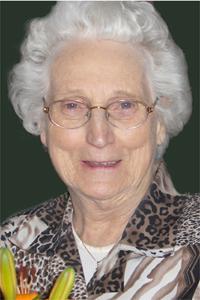 APRIL 29, 1922 ~ MARCH 2, 2014
Anne Cowan, beloved mother, grandmother and great- grandmother, passed away peacefully at the Beverly Center in Calgary on Sunday, March 2, 2014 at the age of 91 years. Mother was one of sixteen children born to Mary and Purl Beers in Emerson, N.B. She was an active member of the First United Church, Maple Leaf Chapter No. 7 O.E.S., 702 Wing Air Force Association, Royal Canadian Legion, Steward Branch #4, and Lethbridge Senior Centre. Mom golfed for many years at Magrath Golf and Country Club. She clogged well into her seventies which helped keep her attitude young and her bones strong. Alzheimer’s claimed mother’s mind years ago but not her spirit. She was well-loved and will be missed and remembered for her strength and her wonderful, self- deprecating sense of humor. Anne is survived by her daughters Carolyn Cowan, Wendy Thomas and Donna (Jim) Smith; grandsons Tyler and Lucas Thomas; great grand-children Peyton and Bronwyn Thomas, as well as hundreds of nieces and nephews (remember the 15 brothers and sisters). Mom was predeceased by her husband George, sister-in-law Margaret Meidinger, son-in-law Chris Thomas, mom’s parents and all her siblings. A Memorial Service will be held for Anne Cowan at 3:00pm on Tuesday, July 22, 2014 at Mountain View Cemetery in Lethbridge. The service will be held at the graveside of George Cowan where mother will be laid to rest. Send condolences at www.mbfunerals.com.