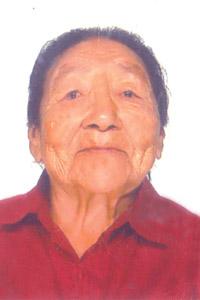 It is with heavy hearts that we the family of MARY STANDING ALONE – "Piksiiksiinaohkomi" announce the passing of our beloved mother at the Lethbridge Regional Hospital on July 15th, 2014 at the age of 81years. Mary was born July 10, 1933 to the late Tom Eagle Speaker and Doris Hind Bull. Due to losing her mother at birth, her father could not raise her alone, therefore, she was adopted and raised by the late Joe and Mary White Man Left. Mary is survived by her children Theresa Burnett, Dolores (Fred) Standing Alone, Gilbert (Lorna) Standing Alone, Angela (Lawrence) Big Sorrel Horse, Ronald (Rochelle) Cutter, Doris (Leslie) Standing Alone, and Lorna (Merlin) Eagle Plume; 38 grandchildren, 55 great grandchildren and 2 great great grandchildren. She also raised 2 of her grandchildren whom she held dear to her heart – Devon (Jessica) Standing Alone and Tyrike Standing alone. She is also survived by her brothers Clyde (Pearl) First Rider, Ervin First Rider, Conrad McDonald, Joseph (Joan) White Man Left; sisters Lavena Devine, Sharon, Wanda, and Ramona (Ervin) Eagle Speaker, Victoria Calf Robe, Jeanette (Brian) Stevens, Mary, Rosabelle, and Nora First Rider; several nieces and nephews. Due to unforeseen circumstances at her birth, Mary had a large extended family including the Eagle Speakers, Hind Bulls, White Man Lefts, and Shoutings. Mary was a true native in her helpful and humble ways. She opened her heart to many other children, too numerous to mention, who called her mother and know in their hearts who they are. Mary received her education at St. Mary’s Residential School where she learned to cook, sew, and clean – the techniques of being a good home maker. She spent her summers helping her parents with her younger siblings and tending to household and traditional duties. She also enjoyed donating berry soup for the Sundance yearly, usually on the first day. Mary was released from Residential School at the age of 15. She married Gilbert Standing Alone at the age of 17 with whom she had 3 children. She left the reserve at the age of 23 and later married Ronald Cutter with whom she had 5 children. She resided on the Blackfoot Reserve for many years with Ronald and worked at several jobs. While there, she began her foster parenting and continued to work for the Southern AB Region for 35 years. Her selfless, kind, and nuturing nature shone through when helping others. She helped her parents at Sundance and helped her siblings by baby-sitting so they might pursue better life-styles. Whenever she was needed, she was there. She later moved to Calgary where she volunteered and worked for many native agencies as well as educators to help our youth with the fundamentals of culture, traditions, and Blackfoot language. She also did Blackfoot history and tales to promote and instill the values and morals of our culture starting from preschool to Jr. High students. She was also well known for her work at the Calgary Stampede Bannock Booth where she earned the name "Bannock Queen". Mary was also a movie star, appearing in movies such as Shang-Hi Noon, Into the West, Bury My Heart at Wounded Knee, and The Last Rites of Ransom Pride. Though she was not educated in the English way, she had the wisdom, knowledge, and experience of a great teacher. She was known for her generosity, humbleness, helpfulness, forgiving heart and warm, loving, gentle and beautiful smile. Some of her favorite past-times included doing the twist, listening to Elvis Presley, Charlie Pride, and Pow-Wow music, and attending bingo. Her greatest joy, however, were her grandchildren whom she never forgot on Christmas and Easter. She made sure she had gifts and baskets for her family. Mary was predeceased by one son Ronald James Cutter; parents Tom Eagle Speaker & Doris Hind Bull; stepmother Maggie Eagle Speaker; adopted parents Joe & Mary White Man Left; 3 grandchildren Joanne, Alton and Leland Standing Alone; brothers Francis, Pete, Bernard, and Adrian White Man Left, Thomas Eagle Speaker, Randy, Herbert and Eddy First Rider; sisters Peggy Bruised Head, Elizabeth, Linda, and Vina Eagle Speaker, Rosie White Man Left, Louise Medicine Crane, Christine White Man Left, Margaret and Merdan First Rider; fathers of her children Gilbert Standing Alone and Ronald Cutter. We apologize if we have forgotten to mention anyone. A Wake Service will be held at the Senator Gladstone Hall, Blood Reserve on Wednesday, July 23rd, 2014 from 7:00 p.m. continuing all night. The Funeral Service will be held at the Senator Gladstone Hall, Blood Reserve on Thursday, July 24th at 11:00 a.m. Interment in St. Catherine’s Cemetery, Blood Reserve. E-mail condolences to: legacyfh@telus.net.