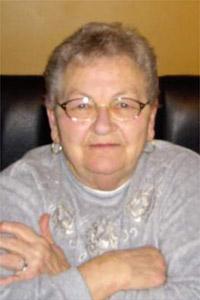 LORRAINE NORDIN, beloved wife of Rudy Nordin of Lethbridge, passed away at the Chinook Regional Hospital on Monday, July 21, 2014 at the age of 79 years. Besides her loving husband, Lorraine is survived by her children; Glenda (Scott) Young of Lethbridge, Crystal Nordin of Lethbridge, Debbie (Jeff) Blair of Sunburst and Rudy (Donna) Nordin of Coaldale as well as 13 grandchildren and nine great- grandchildren. She is also survived by two brothers Stan (Elsie) Montgomery and Glen Montgomery and two sisters Merle Verboom and Vicky (Pete) Sisetsky as well as son-in-law Malcolm MacFarlane and numerous nieces and nephews. Lorraine is predeceased by three sons Percy, Grant and Dean Nordin, two daughters April Semak and Pat MacFarlane, two brothers William and Wayne Montgomery as well as both parents. Lorraine was born on April 13, 1935 in the town of Davidson. She spent much of her youth living in rural Saskatchewan until settling in Moose Jaw where she met her husband Rudy. They were married in 1954. They moved from Saskatchewan to Alberta in 1965 and chose to settle in Lethbridge. As an individual, spouse and parent, she was largely involved in local sports, spending many of her hours playing and volunteering. Her largest interests included curling, softball and bingo. Her largest role in life was being a mother (to everyone). She kept her warmest smiles and biggest hugs for her children and grandchildren. The world was a better place for having her in it. We all love and miss you. Relatives and friends are invited to pay their respects at CORNERSTONE FUNERAL HOME, 2800 Mayor Magrath Drive South, Lethbridge, AB on Thursday, July 24, 2014 from 7:00 P.M. to 8:00 P.M. A Funeral Mass will be Celebrated at ST. BASIL’S CATHOLIC CHURCH, 604-13th Street North, Lethbridge, AB on Friday, July 25, 2014 at 1:00 P.M. with Father Kevin Tumback, Celebrant. Interment to follow in the Mountain View Cemetery. In memory of Lorraine, donations may be made to the Heart and Stoke Foundation, #100, 119 – 14 Street N.W., Calgary, AB, T2N 1Z6 or to the Alberta Lung Association, # 208, 17420 Stoney Plain Road N.W., Edmonton, AB, T5S 1K6.