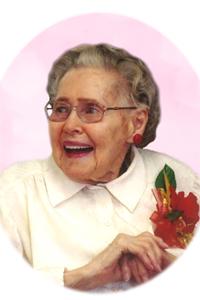 VIRA GAILE KING passed away at the Milk River Hospital on Monday, July 21, 2014 at the age of 92 years. Vira is survived by her 5 children; William (Janie) King of Milk River, AB, Mark King (Rita Robbins) of Fairview, AB, Brian King (Smokey Young) of Peace River, AB, Pearl (Dan) Phypers of Creston, B.C., and Larry (Sue) King of Valley View, AB, as well as 18 grandchildren, 26 great-grandchildren, and 2 great-great-grandchildren. She is also survived by numerous nieces, nephews, and cousins and many friends. Vira was predeceased by her husband Eugene, grandson Curtis, and two brothers Don & Mark. Vira was born on March 16, 1922 in Woodpecker, B.C., 35 miles south of Prince George. She was raised and educated there till grade 8. Vira and her mother moved to Coutts, A.B, and then Aden, returning to Woodpecker in the spring of 1940. She met Eugene while in Aden and then were married in Woodpecker on October 23, 1940. Together they moved back to Aden to start their family. As a family they ranched and farmed and Vira especially enjoyed her garden. Vira was a strong member of the Presbyterian Church, starting the Sunday School in Aden in 1954. In 1968 they moved to Creston, B.C. Unable to sit for too long, Vira began cooking at the Bus Depot and then Swan Valley Lodge and T.H. Guestranch. Following the passing of her husband Eugene, she eventually moved back to Milk River, A.B. to fully retire. She was a hard worker and good homemaker. Vira will be remembered as a wonderful wife, mother, grandmother and faithful friend. She will be sadly missed. A Celebration of Life will be held at ST. PAUL\’S UNITED CHURCH – 201 2nd Avenue N.E. Milk River, AB on Tuesday, July 29, 2014 at 2:00 P.M. with Reverend Sarah Wallace officiating. In memory of Vira, donations may be made to the Town of Milk River, 240 Main Street, Milk River, AB T0K 1M0, for the Prairie Rose Lodge.