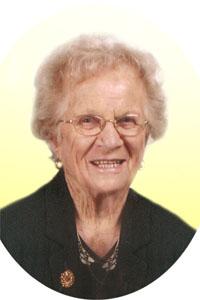 1926 – 2014
It is with great sadness that we announce the passing of MARIA DELBELLO on Wednesday, July 23, 2014 at the age of 88 years. Maria was a devoted wife, mother, Nonna and Great Nonna. She is survived by her sons: Aurelio (Diane) and Oriano (Brenda); her grandchildren Mandy (Scott), Tom, Janelle, Conor, James and Brianna; and her great- grandchildren Madeleine and Jackson. She is also survived by her sister Celestina (Sr. Gabriella) of Gorizia, Italy as well as numerous nieces and nephews. She was predeceased by her husband Gioacchino (John), her infant son Marino, her parents Giovanna and Giuseppe, and her siblings Mary, Giuseppe, Anna, and Giovanni. Maria was born on March 23rd, 1926 in Krkavc?e, Monte Koper, Slovenia. She emigrated with her family from Italy in March 1957, settling initially in Coaldale and then moving to Lethbridge where she resided until her passing. She worked at St. Michael’s hospital in housekeeping for over 20 years until her retirement in 1990. Nonna’s pre and post-retirement second job was caring for her grandchildren and great-grandchildren, her piccolo bambinos, young and old. Nonna was an avid gardener who loved taking care of her vegetables and flowers. She also took great pride in her home, to which the doors were always open for the people she loved. She was passionate about baking and cooking and will be remembered as having made some of the best gnocchi around. Nonna truly loved spending time with her family which extended far beyond her relatives. She had a special place in her heart for Elda and Lidia as well their families. Nonna’s love will be felt by many for years to come. A Prayer Service will be held at CORNERSTONE FUNERAL HOME – 2800 Mayor Magrath Dr. South, Lethbridge, AB on Monday July 28th, 2014 at 7:00 P.M. with Deacon Cliff Bogdan officiating. A Funeral Mass will be celebrated at OUR LADY OF ASSUMPTION CATHOLIC CHURCH, 2405-12th Avenue South, Lethbridge, AB on Tuesday, July 29th, 2014 at 10:00am with Father Nathan Siray, Celebrant. Interment to follow at Mountain View Cemetery. Memorial tributes can be made to the Heart and Stroke Foundation of Alberta: 100-119 14 Street N.W., Calgary, Alberta T2N 1Z6