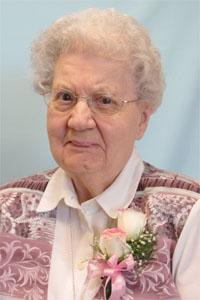 Duprey: Sister Raphael, 95 a Sister of St. Martha of Antigonish, died at Bethany, motherhouse on Monday, July 21, 2014. She was in the 76th year of religious life. Born in Westville, NS, Sister Raphael was the eldest of five children of the late Angus Duprey and Jennie (White) Duprey. Sister entered the Congregation of the Sisters of St. Martha in September, 1936, pronounced her first vows in 1938, and her perpetual profession of vows August 24, 1942. After her profession of vows, Sister Raphael ministered, chiefly, in office duties in various institutions operated by the congregation and in later years volunteered in pastoral care. She was Community Leader in several convents where she lived. In Nova Scotia, Sister served at Bethany, St. Martha’s Hospital, R. K. MacDonald Nursing Home, all in Antigonish, and at St. Joseph’s Hospital, Glace Bay. In Alberta, she served at St. Michael’s General Hospital and Martha Centre, both in Lethbridge, Mineral Springs Hospital, Banff, and St. Elizabeth Convent, Calgary. Sister Raphael is fondly remembered in the many health care institutions of the Sisters, East and West, for her gentle spirit and compassionate presence to all who entered her life. Sister Raphael is survived by a sister, Sister Gladys, CSM, and a brother, George. Besides her parents, she was predeceased by a sister, Genevieve O’Leary and a brother, Martin. The remains will be resting at Bethany, beginning Thursday, July 24, at 1:15 p.m., where a Celebration of Vigil will be held on the same evening at 7:30. Liturgy of Christian Burial will take place on Friday, July 25, at 2:00 p.m. in the Bethany Chapel. Arrangements are under the direction of MacIsaac Funeral Home, Antigonish.