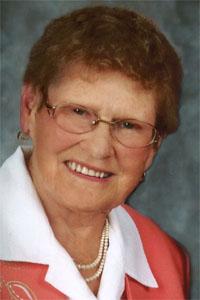 1930 ~ 2014
Audrey passed away at Chinook Regional Hospital in the early morning hours on Sunday, August 3, 2014. Audrey was born in Winnipeg, Manitoba and worked hard on the family farm at Stoney Mountain, Manitoba. She fell head over heels for a newly arrived Scot, and they married on May 21, 1949. They immediately moved to Lethbridge and resided here for 65 years. Audrey had a very strong faith and was a member of St. Andrews Church for 60 years. Left to mourn are husband William \”Bill\”; daughter Margaret (Garry); two sons, Alexander (Sheila) and Bill Jr. (Carmen); four grandchildren Patrick (Kelly), Nicole (Justin), Karen (Mike), and Jessica (Jake); nine great grandchildren; brother Ted (Sandra) in Manitoba, and many family members in Scotland. Audrey was predeceased by her parents, and eleven brothers and sisters. A Prayer Service will be held at 6:00pm on Thursday, August 7, 2014 at MARTIN BROTHERS RIVERVIEW CHAPEL, 610 – 4 St. South, Lethbridge, AB. A Funeral Service will be held at 10:00am on Friday, August 8, 2014 at MARTIN BROTHERS RIVERVIEW CHAPEL, 610 – 4 St. South, Lethbridge, AB, with Reverend Hugh Jack, officiating. Send condolences atwww.mbfunerals.com.