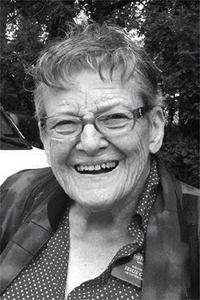 HELEN HEAD DAHL, wife of the late R Mark Dahl, passed away in the Raymond Hospital on July 31st, 2014 at the age of 89 after suffering a stroke. She is survived by her children Dennis Dahl (Marilyn), DeVar Dahl (Lesley), Allan Dahl (Kathy), Ireta Balderson (John), Kenneth Dahl (Sharon) and Nola Bateman (Wade). She is also survived by three brothers Lawrence, Kitchener and Grant Head. Helen was born in Magrath October 15th, 1924. She grew up in Wrentham and Cardston where she graduated from high school. Following graduation she moved to Edmonton and graduated as a nurse. She met Mark Dahl in Edmonton while working as a nurse and he was in medical school. They were married June 25th, 1948 in the Salt Lake Temple by Joseph Fielding Smith. Their six children were born between 1950 to 1960. They reared their family in Magrath where Mark practised as a family physician for over 40 years. Helen was know for her sense of humor and could get anyone to sing as she lead the singing in church. She loved to serve in the LDS church and her last 12 years were spent in Utah serving in the temple and a humanitarian service mission. She loved her children, grandchildren and great grandchildren and despite referring to herself as a Luddite she kept us informed of her service in Utah with frequent emails and Jackie Lawson Cards. She had a strong will and would sometimes say \”Let’s compromise and do it my way\”. But it was this strong will that was also one of her greatest strengths as she met the challenges of life, raising a family and serving in her church. She has left a great example of determination and perseverance for her family to follow and anyone else that knew her well. She will be sadly missed but fondly remembered by all that were touched by her life, especially her family. Her Funeral will be held Tuesday, August 5th, at 2:00 p.m. in the Magrath Stake Center. Friends may met the family Monday, August 4th, from 7:00-8:00 p.m. in the Stake Center and again from 1:00-1:45 p.m. prior to the Funeral. Interment in the Magrath Cemetery, Magrath, Alberta. Arrangements entrusted to Berry Gorham. Email your condolences to: legacyfh@telus.net.