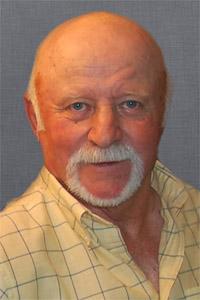 RICHARD (DICK) ALLAN WIEST dearly loved husband of Karen Wiest, passed away at the Calgary Foothills Hospital on Tuesday, August 12, 2014 at the age of 76 years. Dick was born June 13, 1938, at home on the Wiest farm, the youngest of 15 children of Clarence and Edith Wiest. He received all his schooling at Enchant. The only time Dick strayed from Enchant was in 1954, when he played for the Taber Junior Baseball Team and 1958, when he played semi-pro ball for the Vauxhall Jets. He continued his love for the game playing on the Old Timers team. He loved all sports and played for many years on the local hockey and baseball teams. Later, as his boys grew, he went on to coach some of their teams. His favorite pastime was to watch his boys and grandchildren follow in his footsteps in their love for hockey and baseball. As his family grew, he learned to expand his sport interests to include figure skating, volleyball, basketball and track. December 28, 1961, Dick married Karen Odland. They lived in the \”Honeymoon Shack\” north of Lost Lake until they purchased the old Herb Stevens house and barn in 1963, and had them moved to their homestead where he resided for the rest of his life. Dick always considered himself a real homesteader, as he had to break up all his land and plant each and every tree. Throughout the years he also raised a variety of livestock such as cattle, chickens, emus and even peacocks. Dick has always been very active in his community and was always up for a challenge. He was instrumental in bringing the following to Enchant: original park and golf course, skating rink, seed cleaning plant and our local museum. He also served as a member of the Enchant and District Historical Society. Dick is survived by his wife Karen, his 4 children and their families: Rachelle (husband Brian, children Taryn & Jonathan Tycholis, Kyla, Eric & Holly, Chelsey) Steeves, Richard (wife Kandis, children Joshua & Jenna (great grandson Jackson), Mikel, Jordan, Dallas McGrath, Joel McGrath) Wiest, Rodi (Shauna, children Daniel, Brooke, Dharma, McKenzie) Wiest, and Ryan (wife Cherlynn, children Jaelynn, Kamryn) Wiest. He is also survived by his brothers Cecil (wife Louise) Wiest and Phil (wife Caroline) Wiest; as well as numerous nieces and nephews. He was predeceased by his daughter Shannon Wiest; parents Clarence & Edith Wiest; siblings John Wiest, Phyllis Howg, Wilfred Wiest, Lola Batalden, George Wiest, David Wiest, Roy Wiest, Mike Wiest, Charles Wiest, Helen Wiest, Elsie Bryant and Reginald Wiest. A Visitation will be held at CORNERSTONE FUNERAL HOME, 2800 Mayor Magrath Drive South, Lethbridge on Monday, August 18, 2014 from 7:00 P.M. to 8:00 P.M. The Celebration of Life will be held at the ENCHANT COMMUNITY HALL, 127 Center Street, Enchant on Tuesday, August 19, 2014 at 2:00 P.M. with Pastor Jeff Frostad officiating. In lieu of flowers, in memory of Dick Wiest all donations can be made to the Heart & Stroke Foundation of Alberta, PO Box 2211, Lethbridge, AB, T1J 4K7 or to the Southern Alberta Bible Camp, Box 99, Lomond, AB, T0L 1G0.

One Condolence for “WIEST Richard”