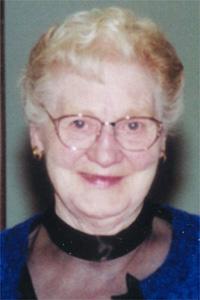 1924 — 2014
It is with deep regret that we announce the passing of Constance (Connie) Johnston on August 13, 2014, just one month short of her 90th birthday. Connie was the loving wife and soul mate of Craig Johnston, whom she married in 1958, and who predeceased her in 2004. Connie was born in Cowley, AB on September 18, 1924, the youngest of the fourteen children of Nora and George Porter. After finishing high school, Connie worked briefly as a hairdresser and then as a secretary / receptionist for John Deere Ltd. in Calgary until the company offices were moved to Edmonton. She then worked for the Calgary Board of Education until her retirement in 1982. Connie is survived by her two sons — Ron (Marita) and Arthur; two grandchildren — David and Amanda; two sisters-in-law — Ellenor Porter and Karma Porter; and numerous nieces and nephews. In addition to her husband, she was predeceased by her parents, nine sisters, and four brothers. To honour Connie’s wishes, no funeral service will be held. Cremation. A graveside service will take place on Monday, August 18th at 1:30 PM at the Livingstone Cemetery north of Cowley, AB. Refreshments will be served following at the Heritage Inn in Pincher Creek, AB. Family and close friends are welcome to attend either, or both, functions. If so desired, donations in memory of Connie may be made to STARS at 1441 Aviation Park NE, Box 570, Calgary, Alberta T2E 8M7 / Phone: 403-295-1811 | 1-888-797-8277.