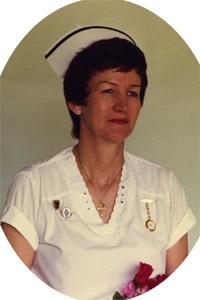 It is with profound sadness that we announce the passing of MRS. JILL ROSALIND TYSON, on Tuesday 5th August, at the age of 76, from complications following a severe stroke. She leaves to mourn her passing her husband of fifty four years, Brian, her two children, Fergus and Dominic, and their partners Gail Munro and Terry Tippins, plus her grandchild, Alyssa, and two step-grandchildren Andrew and Frances, and Andrew’s child Ethan; also her brother John, and his extensive family; and brothers-in-law Patrick (Pam) and Shaun Tyson and their children and grandchildren. She also leaves to lament her loss an army of friends, who showed their love during the last sad months of her life. Jill was born in Osterley, England in 1938, and was educated at Haberdashers’ Aske’s School in Middlesex. She had many gifts. She possessed a beautiful soprano voice, sang in church choirs from the age of eleven; was an early member of the University of Lethbridge Choir; sang for over a decade with the Concordia Singers, and was still singing soprano in McKillop Church Choir at the time of her illness. A strong artistic sensibility made her a lover of paintings, theatre, and all good music from Classical to Folk. She played the piano and the guitar. Her sense of humour was unrivalled. She was also an outstanding cook, and–in Brian’s opinion–the best maker of picnics in Western Canada! In the 1980’s she proved herself an author, publishing articles in R.N. and Nursing 88; and, when she fell in love with the camera, her photographs won prizes, and her photographic cards were in great demand. Above all, however, she was a born nurse, the gold medallist of her graduating year at West London Hospital, in Middlesex, where she became an R.N in 1960. In that year she also married Brian, whom she had met three years earlier, when they were still both students. She was the light of his life, soulmate, kindred spirit, best teacher, and a matchless companion on many adventures. In 1968, with their two children Fergus, aged six, and Dominic aged three, Jill and Brian emigrated to Canada, where she became a clinic nurse, and, when her children were old enough, decided to return to full-time nursing. But instead of the few courses required to convert her English R.N. into a Canadian one, she elected to take the whole programme, and graduated from the Lethbridge College in 1986 at the age of 48, as valedictorian of her class. Subsequently she chose geriatric nursing, and worked at the Auxiliary Hospital until her retirement in 1995. After they retired, she and Brian enjoyed almost twenty years of travel, love and laughter together. She shared with him an undying love of Nature, in particular of birds and flowers; and together they explored the back roads of Alberta, the foothills of the Rockies, and the coasts of Canada. All her life Jill put others before herself. Her generosity of spirit and practical love enriched the lives of all she met. She cared deeply not only for people, but for countless stray cats and hurt birds, spending her life and strength in their service. For fifteen years she cared faithfully for the birds in St. Michael’s Care Centre, and was a long-time volunteer for and supporter of the Lethbridge Humane Society. Most recently, she looked after her granddaughter during the latter’s four years at the University of Lethbridge. God was for her the fountain that enabled her to offer such a continuous outpouring of love, and the source of her hope that this earthly life is but the beginning of a wonderful adventure that has no end. \”I know the one in whom I have put my trust, and I am sure that he is able to guard until that day what I have entrusted to him.\” A Memorial Service will be held at MCKILLOP UNITED CHURCH, 2329 – 15th Avenue South, Lethbridge on Saturday, August 30, 2014 at 10:00 A.M. with Reverend Trevor Potter officiating and Reverend Fergus Tyson assisting. In lieu of flowers a donation may be made to the Lethbridge and District Humane Society (http://lethbridgehumanesociety.com)