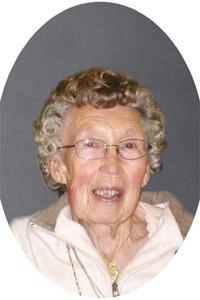 RUTH IDA ANTONETTE JOHNSON, beloved wife of Lee Johnson, of Lethbridge, passed away in Legacy Lodge on Monday, August 18th, 2014 at the age of 91 years. She is the loving mother of: Sharon (Martin) Alcock of Calgary, Marion (Jim) Rasmussen of Bowden and Heather (Robert) Skakum of Lethbridge. Grandmother of Carla (Jason) Giebelhaus of Edmonton, Cristy (Cory) Whalen of Maclennan, Lindsey Skakum of Edmonton and Michelle Skakum of Lethbridge and great grandmother of Sarah & Bennett Whalen and Jack Giebelhaus. Ruth was born on February 8, 1923 in Regina, Saskatchewan where her family homesteaded at Richardson. They moved to Regina when she was 7. As the oldest of four children she was responsible for her siblings while her parents worked. After completing high school at Scott Collegiate, she attended secretarial school and then began working for the Prairie Farm Rehabilitation Administration (PFRA) and returned there after the war. On March 2, 1943 she joined the RCAF Women’s Division and was assigned to administration offices in Fingal then Trenton, Ontario. As a Corporal at the end of WWII she closed down both Fingal and Trenton Air Force bases. She married Leland (Lee) Johnson of Viscount, Saskatchewan in Regina on January 29th, 1949 and moved to Lethbridge where they were happily married for 62 years. Lee passed away July 7th, 2011 and is sorely missed. Ruth and Lee were charter members of Good Shepherd Lutheran Church and were active in their church family. Ruth coordinated Creative Fingers, an active group who made quilts for Lutheran World Relief and sold quilts to raise funds for church projects. Ruth and Lee were enthusiastic junior hockey season- ticket holders. She enjoyed family photography, playing cards and board games and the cartoon "The Family Circle". Ruth spent many hours sewing quilts and weeding their beautiful garden. Another thing Ruth and Lee were passionate about was travelling. They took memorable trips across Canada, the Eastern States, Sweden, Norway, Alaska, Hawaii, Yugoslavia and Bermuda. A Funeral Service will be held at the LUTHERAN CHURCH OF THE GOOD SHEPHERD – 2406 11th Avenue South, Lethbridge, Alberta, on Saturday, August 23rd, 2014 at 11:00 A.M. with Pastor Tom Peterson officiating. In Lieu of flowers, the family would appreciate that donations be made to Canadian Lutheran World Relief. This was a charity that was very close to Ruth’s heart. http://clwr.donorshops.com/