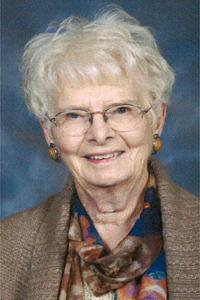 APRIL 4, 1921 — AUGUST 24, 2014
Goldie Elaine Snowden, beloved wife of the late Ernest MacIndoe Snowden, passed away at St. Therese Villa, Lethbridge, Alberta on Sunday, August 24th at the age of 93 years. Goldie was born on April 4, 1921 on the family homestead at Barons, Alberta, the eldest of five children born to Janet and Carl Kittleson. Goldie loved school and, after finishing Normal at Calgary, Alberta, took up teaching in 1939. She began her long teaching career at Ridgeway, a one-room school near Carmangay and came to White School in 1941. White School was near and later centralized into McNally School where she also taught. An accomplished pianist, Goldie played accordion in a local band and attended the weekly dances at White School where she met Ernie Snowden. Married on May 1, 1942 in Barons, they followed Ernie’s flying career in the RCAF. It took them to Ottawa and Arnprior in Ontario, and High River in Alberta. On his discharge they returned to Lethbridge and then settled on the family dairy farm south east of the city. They raised a family and Goldie fed all those working on the farm in the early years. She was an exceptional seamstress, making most of her own clothes, and went on to share her skills with the Lethbridge 4H Sewing Club. She was also active in the local community association and its women’s group, Southminster United Church, the Lethbridge and District Exhibition (where Ernie was President and chaired Livestock, Racing, Rodeo and other committees over their many years), the Lethbridge Seniors Association and the Lethbridge Historical Society. She was heavily involved in the publication of Water Works Wonders, the community history of the White, Wilson, McMahon & River Junction School Districts. Goldie and Ernie loved to dance — square, round and modern. Goldie was also an avid bridge player. Goldie was predeceased by her parents Carl Salvason Kittleson and Janet Morris Goldie; her brother Morris, and her husband Ernest (September 25, 2006). She is survived by her sisters Caroline Kroshinsky (Lethbridge) and Maxine McClellan (Arcadia, California); her brother Alan (Lethbridge); her three children, Barry Snowden (Marion, Lethbridge), Sandra Valgardson (Brad, Taber) and Suzanne Gillman (Miles, London England); 6 grandchildren and 5 great grandchildren. Goldie touched many lives and will be greatly missed. As per Goldie’s wishes, there will be no formal funeral service. A family graveside service was held on August 28, 2014. Memorial Donations in Goldie\’s name may be made to Lethbridge Community Foundation, # 407\” 740 4 Ave S, Lethbridge, AB T1J 0N9. Send condolences at www.mbfunerals.com.