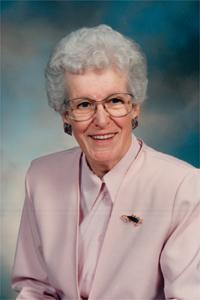 AUDREY SUSAN SWEDISH (CHISWICK) passed away on Saturday, August 30, 2014 at the Lethbridge Chinook Regional Hospital at the age of 93. She was born in Lethbridge on June 6, 1921, the oldest of two daughters of George and Susan Chiswick. She was predeceased by her parents, sister Thelma Bambrick, her husband George Swedish and her son, Douglas Baines. Audrey is survived by her niece Heather Lejbjuk (George) of Lethbridge and her nephew Terry Bambrick (Dina) of Creston, B.C. as well as numerous cousins, great nieces and great nephews and their children. Audrey’s working years included employment with the RCMP as secretary to the Officer Commanding the Sub-Division here in Lethbridge; part-time and eventually full time employment with the Lethbridge School District No. 51, where she retired as executive secretary to the Superintendent. As a secretary who doubted she would last for the three month probation period she ended up working for four different Superintendents retiring after 23 years in June of 1981. She certainly loved her job and took great pride in her work. Audrey has always been a history buff and was approached by the School District in her retirement to chronicle \”The First Hundred Years\” of the Lethbridge Public Schools. Five years later a 230 page distillation of 100 years of public school history \”From College to Composite\” was written. Audrey was a long time member of St. Augustine’s Anglican Church. She became a member of the Sanctuary Guild at the age of 16 and taught in the primary Sunday School later serving as Superintendent of the Sunday School for five years and loved every minute of it. Auntie had many interests and talents. She worked with Brownies and also served as Guide Captain for the 1st Lethbridge Guide Company. Having joined the Order of the Eastern Star at age 18, she held the position of Worthy Matron in 1952 and again in 2000 for Laurel Chapter #43. In the early 60\’s she was asked to accept the position of Director of Kappa Chapter of Beta Sigma Phi and stayed with Kappa for eight years serving as City Sponsor for two years. She was also a long time member of Sakkara Temple No. 115. Audrey was an avid golfer and a long time member of the Henderson Lake Golf Club. Auntie loved to travel and took many many trips. She would rarely pass up an opportunity to go somewhere. She was a very talented lady who excelled at many hobbies including knitting, sewing, cross stitch, flower arranging to name a few. She had a quick wit and a great sense of humour and loved to entertain with her stories and poems some of which she wrote herself. She will be greatly missed by all who knew her. The family will honour Audrey’s request that no funeral service be held. Cremation in care of Christensen Salmon Generations.