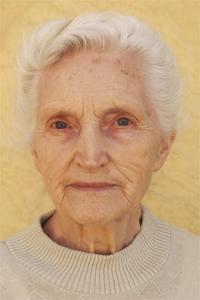 1921 ~ 2014
The Lord took unto Himself our beloved mother, grandmother, and great-grandmother. Mrs. Maaike Van Dijk of Shaughnessy, beloved wife of the late Mr. Lieuwe Van Dijk, passed away on Wednesday, August 27, 2014 at the age of 92 years. She is fondly remembered for her caring nature, singing psalms and hymns, and her passion for farming. She was born on November 10, 1921 in the Netherlands. She married Lieuwe Van Dijk, and together they raised seven children. In 1980 they immigrated to Canada with three sons, and settled on a dairy farm near Park Lake, where she was still residing at the time of her departure. She will be missed by her children Doetje and Anne Hummel (Taber), Goffe and Gre Van Dijk (The Netherlands), Ijbeltje and Klaas Biewenga (The Netherlands), Ben and Fay Van Dijk (Coaldale), Marijke and Alberta Feenstra (The Netherlands), Jan Van Dijk (Park Lake), Mike and Anne Van Dijk (Park Lake), twenty-six grandchildren and twenty-two great-grandchildren. She was predeceased by her husband Lieuwe Van Dijk (1994) and three grandchildren Henrike Van Dijk (1997), Anne Marie Van Dijk (1997), and Leo Minnes Van Dijk (1997). Family and friends are invited to pay their respects from 7:00pm to 9:00pm on Thursday, September 4th at MARTIN BROTHERS RIVERVIEW CHAPEL, 610 — 4th Street South, Lethbridge, Alberta. Mom will be laid to rest beside her husband at 12:00pm on Friday, September 5th, 2014 at MOUNTAIN VIEW CEMETERY, Lethbridge, Alberta. A Service of Remembrance will be held at 1:30pm on Friday, September 5th, 2014 at COALDALE CANADIAN REFORMED CHURCH, west of Coaldale on Hwy 3, with Reverend H. Van der Woerd, officiating. The family requests no flowers during this time. As the deer pants for streams of water, So my soul pants for you, O God. My soul thirsts for God, for the living God, When can I go and meet with God? Psalm 42:1-2. Send condolences at www.mbfunerals.com.