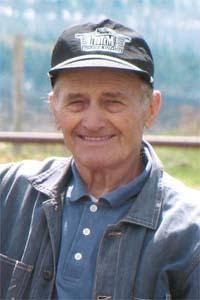 1923 ~ 2014
Mr. Milan Cupric of Lethbridge, beloved husband of Hilda, passed away on Friday August 15, 2014 at the age of 90 at St. Michael’s Health Centre (Palliative Care) after a courageous battle with cancer. Milan was born in Knic, Serbia on December 23, 1923 and immigrated to Canada in 1948. He married his wife Hilda in 1953 and lived in the Crowsnest Pass where he worked for Summit Lime Works for 40 years, until his retirement in 1990. He then moved to Lethbridge where he spent his time enjoying gardening, walking and being a handyman around the house. Milan was a devoted family man and father that provided his children with support and guidance. He encouraged them to work hard, and ensured they were given the best opportunities in life. Family gatherings were always cherished by him as they were special moments with his family. His grandchildren and great-grandchildren were rays of sunshine in his life. He will be greatly missed and fondly remembered by his loving family and friends. At this time, we would like to thank and acknowledge the compassionate care he received from caregivers and the staff at St. Michael’s Health Centre (Palliative Care) and Alberta Home Services (Home Care). He is survived by his loving wife Hilda, daughter Ruta (Daryl) Kiemele and son Harry (Josee); grandchildren Lindsey (Greig) Hern and Kaley (Chet) Oberkirsch; great-grandchildren Michaela, Sadie and Parker Hern and Rylee Oberkirsch and his sisters Milanka and Slobodanka. Milan is predeceased by his parents Danica and Zivojin and a sister and brother. A private Funeral Service was held on Tuesday August 19, 2014 at MARTIN BROTHER RIVERVIEW CHAPEL, Lethbridge, AB. Memorial donations may be made to the Canadian Cancer Society, 317-10 St. S., Lethbridge, AB, T1J 2M7, or St. Michael’s Health Care Foundation (Palliative Care), 1400-9 Ave. S., Lethbridge, AB, T1J 4V5. Send condolences at www.mbfunerals.com.