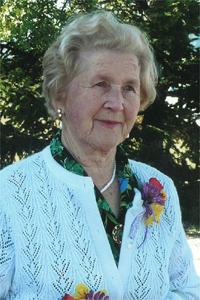 1923 ~ 2014
Helen Marek, beloved wife of the late Walter Marek, passed away after a brief illness, at the age of 91 years, at the Raymond Care Center. Helen was born in Poland on April 2, 1923. Helen is survived by her son Bob Marek of Lethbridge, her daughter Dianna (Herb) McKelvey of Magrath, and six grandchildren: Michael (Shelley) Marek of Raymond (Emma, Abby & Tristan), Melanie (Garfield) Henderson of Cowichan, BC (Mackenna, Avorie & Brixlyn), Chris (Lucy) Marek of Lethbridge (A.J. & Dylan), Lorne McKelvey of Lethbridge, Heather (Gary) Newman of Calgary (Tessa) and Nicole Ehlert of Lethbridge (Jaxon); and her best friend of many years, Lucy Malec of Lethbridge. Helen was predeceased by her husband Walter, her parents Andrzej and Maria Gendek, her sisters Maria, Leokadia, and Jadzia, and her brothers Bruno and Andrzej. As a young girl, Helen had a very hard life- at the age of nine, she was responsible for cooking, cleaning, gardening and looking after her newborn niece while her oldest sister and brother-in-law went to work. As a teen, she taught herself ballroom dancing and went on to win many dance competitions. Helen came to Canada as a war bride in 1951 and married Walter Marek soon after. Helen and Walter worked hard on farms in Foremost and Bow Island. In 1961, they moved to Lethbridge where Walter worked as a barber until his retirement. Helen worked for several years at a cannery and later for Frache’s Greenhouses. Helen was a superb cook and could whip up terrific meals from scratch at a moments notice. She had a \”green thumb\” and always kept a big garden and beautiful flower beds. She was also an exceptional seamstress. Helen and Walter were active members of the Polish Canadian Legion and made a well-matched and graceful dance couple at the Legions’ monthly dances. Helen was a quiet spoken tender, loving soul- always ready with a \”Jache Kocham\” (I love you) to her children and grandchildren. When Walter passed in 1993, she kept up her large home and yard, and still drove her care. At age 85, she moved to Garden Villa Seniors Lodge in Lethbridge. A few years later, she moved to Good Samaritan’s Prairie Ridge Lodge in Raymond. Helen will remain forever in our hearts and will be greatly missed. Family and close friends are invited to attend a Funeral Service at 2:00pm on Tuesday, September 9, 2014 at MARTIN BROTHERS RIVERVIEW CHAPEL, 610 4th Street South, Lethbridge, AB. A private family graveside and blessing will follow immediately after at the Mountain View Cemetery. Helen loved all animals, great and small so those who wish, may make donations in Helen’s name to the Lethbridge & District Humane Society, PO Box 783, Lethbridge, AB T1J 3Z6 or the Lethbridge Animal Shelter, 2405 41 Street North, Lethbridge, AB T1H 5W3. Send condolences at www.mbfunerals.com.

One Condolence for “MAREK Helen”