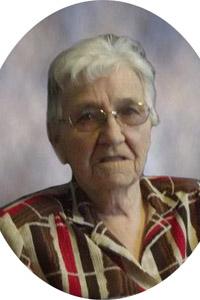 MRS. DOLORES PLOMP, beloved wife of the late Mr. Bill Plomp, of Picture Butte, AB, formerly of Nobleford, AB, passed away at the Chinook Regional Hospital on Sunday, August 31, 2014 at the age of 84 years. Mom was born in Lethbridge, AB, on March 15, 1930 to William & Pearl Beattie. She grew up and was raised on the family farm in the Keho District. Mom did various jobs until she married her husband of 63 years William Plomp and they moved to Nobleford, where they raised their 3 girls. In 2012 she moved to the Piyami Lodge in Picture Butte and resided there until her passing. Dolores is survived by her 3 daughters; Dianne (Tony) Wolak of Shaughnessy, Carol (Tracy) Beglaw of Nobleford and Kathy (Tim) McNichol of Nobleford, 3 grandchildren; Travis, Jody, Jennifer, 3 great grandchildren; Ryden, Walker, Sawyer, her brother Glenn Beattie, numerous nieces and nephews and her cat Nike. She was predeceased by her husband William on June 6, 2014, her parents and her siblings; Doreen (her twin) Grant, Leslie, Betty and Shirley. The family would like to thank the staff at the Picture Butte Piyami Lodge for the excellent care they gave our parents in the last 2 years, as well as the Picture Butte EMS and the Doctors and Nurses of the Chinook Regional Hospital. At Dolores\’ request no formal funeral service will be held. Donations may be made to a charity of one\’s choice. On September 8, 2014 Mom and Dad will be together again to celebrate their 64th anniversary.