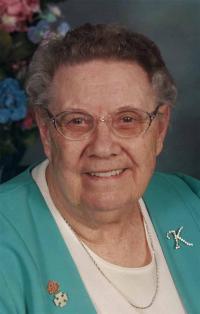 1922 ~ 2014
Mrs. Kathleen \”Kay\” Tichler beloved wife of the late Mr. Edward Tichler passed away at the St. Therese Villa on Thursday, September 4, 2014 at the age of 91 years. Kay was born on December 28, 1922 in Enchant, Alberta and moved to Picture Butte in March of 1927 where she received her education. She married Edward M. Tichler on January 8, 1942 and together they lived on the farm in Iron Springs, moving to Lethbridge in January of 1970. After moving to Lethbridge, Kay attended the Henderson Garbutt Business School obtaining her Secretarial Certificate. She worked for Towne and Country furniture for 5 years and in 1977 joined the staff of St. Patrick’s Credit Union until her retirement in 1987. Kathleen enjoyed volunteering at the Regional Hospital, knitting mittens & infant toques. For many years she worked on the sanctuary guild with St. Augustine’s Church, where she also was an active member of their evening group. Besides her loving husband Edward who passed away in 1979, Kathleen was predeceased by her daughter Frances Marie in 1957; brothers David Parker in 1990 and Thomas Parker in 2011. Kathleen will be lovingly remembered by her children Peter (Marion) Tichler, Bernard (Barbara) Tichler and Patricia (Peter) Aitchison; grandchildren Kelly, David, Jody, Tony, Paul, Heather, Robyn, and Jennifer; 9 great- grandchildren and 1 great- great grandchild. A Funeral Service will be held at 1:00 pm on Wednesday, September 10, 2014 at the ST. AUGUSTINE’S ANGLICAN CHURCH, 411-11th Street South, Lethbridge, AB. In lieu of flowers memorial donations may be made to the Canadian Cancer Society, 317-10th Street South, Lethbridge, Alberta T1J 9Z9. Send condolences at www.mbfunerals.com.