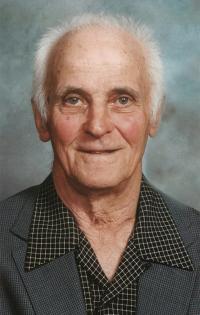 Friday September 12, 2014 was a very sad day for the Viani Family. GIUSEPPE VIANI passed away peacefully in his sleep at the age of 84 years. His battle with Alzheimers is finally over. The Viani Family lost a husband to Giuseppina, a father to sons Angelo (Pam) and Tony (Linda), a grandfather to Bryan and Kimberley and a great-grandfather to Kyeler and Lexi. He is survived by brothers Giovannino (Maria), Michele (Anna) and Felice (Denia) and sister Vincenzella (Nicolino) in Italy. He will also be dearly missed by his many nieces and nephews. He is predeceased by his brother Tony (Delores) Viani. To his many Canadian friends he was known simply as ³Joe². Joe came to Canada in 1962 to make a better life for his family. 4 years later his wife and two small children joined him to reunite his famiglia. Joe worked at Nord Precast for many years and later began his 20 year commitment to Canbra Foods. Joe loved sharing meals with his family and friends. He took great pride in making his renowned homemade wine. To his close friends in the Italian community in his new country he was affectionately called ³Peppe². He was very proud of his heritage regularly attending functions with his paesans in the Italian Canadian Club where he loved to dance and be the life of the party. Perhaps his favorite hobby was devoting endless hours tending to his vegetable and flower gardens. The back yard was a sight to behold with a perfectly manicured lawn, rows of vegetables, varieties of flowers, apple trees and a spectacular canopy of grapes. Joe¹s strong love and devotion for his family was evident early in his young life in Civitanova del Sannio. He was born February 10, 1930, married February 14, 1955 and shortly after his second child was born, he sacrificed watching his young children grow up to move half a world away on his own to create a better life and future for his family. He travelled back to the old country many times to visit his extended family and tour around the country. Giuseppe ³Joe² ³Peppe² Viani had a full life and was taken away from us sadly just shy of his 60th wedding anniversary. A Prayer Service will be held at CORNERSTONE FUNERAL HOME – 2800 Mayor Magrath Drive South, Lethbridge, on Thursday, September 18, 2014 at 7:00 P.M. with Len & Sandy Whyte officiating.A Funeral Mass will be celebrated at OUR LADY OF THE ASSUMPTION CATHOLIC CHURCH, 2405-12th Avenue South, Lethbridge, on Friday, September 19th, 2014 at 11:30 A.M. with Father Nathan Siray, Celebrant. Interment to follow at Mountain View Cemetery. In lieu of flowers, memorial donations may be made in Joe’s name to the Alzheimer Society, 740-4th Avenue South, Lethbridge, Alberta, T1J 0N9.Honoured to ServeCornerstone Funeral Home & Crematorium 2800 Mayor Magrath Drive South Lethbridge, Alberta T1K 7B1 Telephone ~ (403) 381-7777 Fax ~ (403) 381-3128 Toll Free ~ 1-(888)-381-7778 care@cornerstonefh.ca