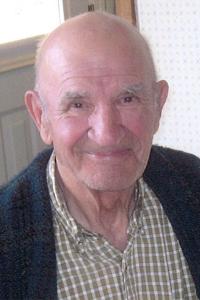 1918 ~ 2014
The family of Peter Joseph Mack, sadly but joyfully announce his peaceful passing to be with the Lord, on Thursday, September 18, 2014 at the Good Samaritan’s Vista Village in Pincher Creek at the age of 92 years. Peter is survived by his two daughters, Judith Gordon (Gary) of Calgary and Norma Reynolds (George) of Pincher Creek. His grandchildren, Lori, Allison (George) Malhi, Lesley (Jan) Klinec and Keith (Nicole) Reynolds. His great grandchildren, Victoria Gordon, Tyson, Jasmine and Evan Malhi, Dawson and Abigail Reynolds step great grandsons, Gary Malhi and Jakub Klinec as well as numerous nieces, nephews and their families. Dad was born on the family farm close to Glaslyn Saskatchewan, moved to southern Alberta as a teenager and eventually resided in Coaldale after marrying Nettie and started to raise a family. Dad started working for the CPR and worked for over 30 years retiring in 1979. Dad and Mom loved to garden and as a result had lots of produce to share with anyone who would take it. Dad also rototilled many gardens in Coaldale and was well known for this. He loved to help people and took great pleasure in his senior years (80-93) driving friends to go shopping or appointments. Dads health failed enough he could not live alone and came to live with Norma for a year and a half, further failing health Dad moved to the assisted living facility in Pincher Creek where he passed. Besides his loving wife Nettie who passed away in 2007, Peter experienced the passing of his parents all of his brothers and sisters, son Phillip, his infant grandson Kenneth Roy and infant great grandchild Marissa Ann. A Memorial Service will be held at 2:00pm on Monday, September 22, 2014 at COALDALE MENNONITE CHURCH, 2316 — 17 Street, Coaldale, AB. Flowers are gratefully declined. Those who wish may give to the Canadian Food Grains Bank, PO Box 767, Winnipeg, MB, R3C 2L4. Send condolences at www.mbfunerals.com.