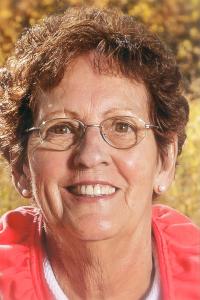 CECILE \”CIS\” MARIE LARIVIERE passed away peacefully with her family at her side on Saturday, September 20th, 2014 at St. Michael’s Health Centre in Lethbridge, Alberta. Cecile was born June 29th, 1938 in Windsor, Ontario to Joseph and Alexina Brunelle. In April 1957, Cecile married her young darling and dance partner, Sidney Lariviere (predeceased), and raised two beloved children, Karen and Mike. She worked many years as a nurse’s aide at Huron Lodge in Windsor, and enjoyed spending time on her apartment balcony overlooking the Detroit River, watching boats float by and listening to the sounds from Detroit Tigers games. Cecile was an avid bowler, a competitive card player, and an ice cream enthusiast. She also loved to travel and visited many warm and wonderful places; including the Caribbean, Mexico, Spain, Jamaica, Florida, Arizona, the Bahamas, and Hawaii. More than anything, she loved to spend time with her family. Cecile was an accomplished cook and often hosted family dinners for the benefit of her children and grandchildren, her friends and family. Cecile is survived by Mag Nelson, her daughter Karen and son-in-law James (Jake) Gaudette, her son Mike and daughter-in-law Alice Lariviere, her grandchildren Stacey Gaudette-Sharp and Stephen Sharp, Sidney and Tina Gaudette, Michelle Lariviere and Lanz Tory and Malissa Lariviere. Her great-grandchildren Luther, Leighton, Harper and Jaxon. Her sister Pauline and son-in-law John Simons, Leona and son-in-law Larry Tessier, brother Henry and sisters-in-law Heather Brunelle and Betty Brunelle. Please join us for a Celebration of Cecile’s life at CORNERSTONE FUNERAL HOME, 2800 Mayor Magrath Drive South, Lethbridge on Friday, September 26, 2014 at 3:00 P.M. In lieu of flowers, donations can be made to the St. Michael’s Foundation, 1400 – 9th Avenue South, Lethbridge, AB, T1J 4V5 or http://www.covenantlethbridge.ca/?page_id=170. A Committal Service will be held at Heavenly Rest in Windsor Ontario on Friday, October 17, 2014 at 11:00 A.M., followed by a luncheon. Honoured to serve the family, CORNERSTONE FUNERAL HOME AND CREMATORIUM, 2800 Mayor Magrath Drive South, Lethbridge, Alberta T1K 7B1. Telephone (403) 381-7777. E-mail: care@cornerstonefh.ca